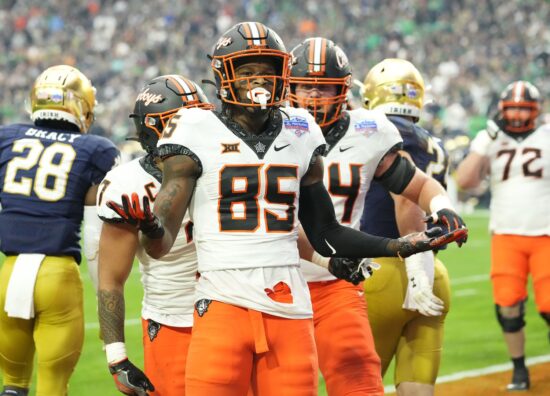 The Oklahoma State Cowboys couldn’t have envisioned the kind of night ahead of them at the Fiesta Bowl vs. the Notre Dame Fighting Irish. With three touchdown passes from Notre Dame’s QB Jack Coan to Lorenzo Styles Jr., Chris Tyree, and Michael Mayer, the number five-ranked Fighting Irish held a 28-7 lead over Oklahoma in the second quarter.

It all then quickly fell apart for Notre Dame. Cowboys QB Spencer Sanders, having already hit Jaden Bray with a nine-yard TD pass in the first quarter, was able to end the second quarter with another nine-yard TD pass to Tay Martin to make the score 28-14 at the end of the first half.

Sanders would once again find Martin on two touchdown connections to tie the score by the two-minute mark of the third quarter. From then on, it was Cowboys kicker Tanner Brown who stole the show. He finished the night with three successful field goals that made the score 37-28 with 2:16 left in the game.

Amid the unlikely comeback by Oklahoma State, Notre Dame found a way to respond at the hands of Coan, who threw a 25-yard TD pass to Austin to make the final score 37-35. But, in the end, it was too late for Notre Dame and more than a historic win for Oklahoma State. Nevertheless, the number nine ranked team demonstrated a remarkable show of solid football to end their 2021 season.

The number seven ranked Baylor Bears had taken an early lead over the Ole Miss Rebels at the Sugar Bowl last Saturday night. For the Bears, the school managed to reach a historic 12-win season mark, making this quite an impressive start to 2022.

It wasn’t until the second quarter when Baylor’s Al Walcott opened the scoring with a 96-yard interception return to get the first points for the Bears. After that, Ole Miss wouldn’t display any signs of a comeback until the third quarter, with a 37-yard touchdown connection between QB Luke Altmyer and WR Braylon Sanders that tied the game.

It was Monaray Baldwin’s 48-yard TD run and QB Gerry Bohanon’s two-yard touchdown pass to Tyquan Thornton that would end the scoring and allow the Bears to not only hit an all-time-high season win mark but also walk away with the Fiesta Bowl title.

With only three days to go, expectations continue to build up before Alabama Crimson Tide’s championship duel against the Georgia Bulldogs on January 10 at Lucas Oil Stadium in Indianapolis.

The matchup was foreseen by experts, especially after Bama’s 27-6 win over Cincinnati. Yet, it was hard to envision Georgia dominating number two Michigan by a 34-11 score on New Year’s eve.

This leaves number three ranked Georgia with better odds, standing at -140 this Monday. Although entirely unexpected, the Bulldogs’ almost perfect 13-1 season mark and their solid performance over the Wolverines pointed to the underdog as one that lies dormant until stepping on the field.

For top-ranked Alabama, the odds are now +115, and the squad will have to watch out for Georgia as the Tide attempts to take their second consecutive NCAA National Championship. However, to experts, Bama’s obvious advantage is no longer evident.