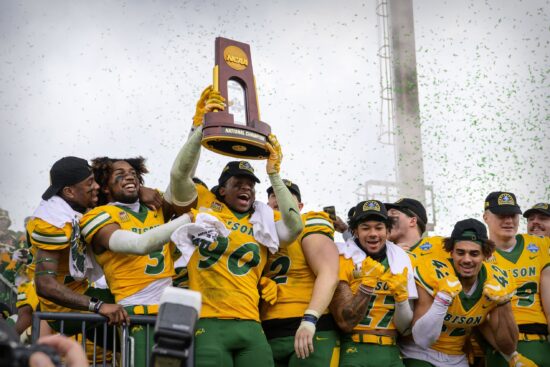 The NCAA football season is coming to an end, staving off major COVID-19 issues. There is still a little more action remaining, including the College Football Playoff National Championship on Monday. The rest of the college football action is wrapping up.

On Saturday, the North Dakota State Bison dominated Montana State in winning the FCS Championship game 38-10. It was their ninth championship in the last eleven seasons

The Bison were dominant in every aspect of the game. The team rushed for 380 yards, with Kobe Johnson leading the team. He had 106 yards, including a 76-yard touchdown run. Quincy Patterson had 11 carries for 98 yards, and Hunter Luepke rushed for 82 yards on 14 carries and three touchdowns.

Quarterback Cam Miller was efficient, completing 9 of 13 passes for 126 yards and a touchdown. North Dakota State finishes the season with a 14-1 record.

Michigan head coach Jim Harbaugh is drawing the interest of the NFL once again. In his last NFL stint, he had a 44-19-1 record as coach of the 49ers with a 5-3 record in the postseason and one Super Bowl appearance.

He was the NFL Coach of the Year in 2011 after his 49ers finished 13-3 and made the playoffs. Harbaugh has a total of twelve years of experience as an NFL coach.

Several NFL teams are looking to possibly make Harbaugh their next head coach, with the most likely teams being the Miami Dolphins and the Oakland Raiders. He was previously the quarterbacks coach for the Raiders from 2002-2003 and had a history with the bay area as coach of the Stanford Cardinal from 2007-2010. The team finished 12-1 in his final season before accepting the 49ers head coaching job.

Miami Dolphins owner Stephen Ross also has ties with Harbaugh. He is a Michigan alumnus and continues to be a booster for the Big-10 school.

Based on some recent comments from Harbaugh himself, some say it’s unlikely he’ll leave. He took a pay cut last year after the season was cut short and said that he would do the Michigan job for free.

Alabama vs. Georgia in Championship Game on Monday

The CFP National Championship game is almost here, with the two teams ready to clash on Monday night. Number one-ranked Alabama will face number-three Georgia in a repeat of the SEC championship in which the Crimson Tide dominated the Bulldogs in their 41-24 victory. Georgia is hoping things will end differently on Monday night.

The Bulldogs will have to figure out how to stop Alabama QB Bryce Young, who torched their secondary throwing for 421 yards and three touchdowns in their last matchup in the SEC Championship game. Jameson Williams had one of his best career games against Georgia, catching seven balls and totaling 184 yards with two touchdowns.

If Georgia wants to come away with the victory, they must limit Alabama’s passing offense. Quarterback Stetson Bennett needs to protect the ball, throwing two interceptions in the last game between these teams.