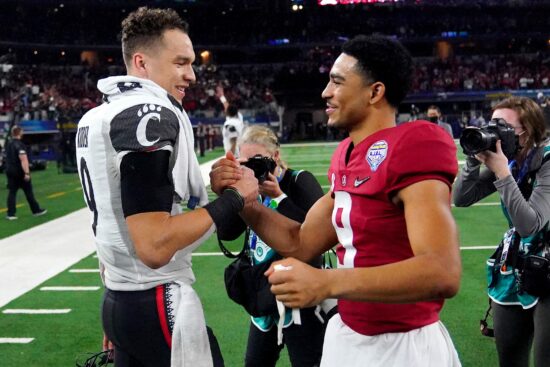 The 2022 CFP National Championship is set with No. 1 Alabama taking on No. 3 Georgia after both teams’ convincing semifinal wins. Alabama will be playing for its second straight title and eighth overall for head coach Nick Saban.

Georgia will be seeking their third championship and first since 1980. This is the second meeting between these two teams in the championship game. In 2018, Alabama came from behind to beat the Bulldogs 26-23 in overtime.

Tide and Bulldogs Get Convincing Wins in Semifinals

Alabama quarterback Bryce Young showed why he’s the current Heisman Trophy winner, throwing three touchdowns in their 27-6 win over No. 4 Cincinnati. Young was 17-of-28 for 181 yards in the victory. Running back Brian Robinson Jr., who ran for 206 yards on 26 carries, powered the offense.

This was the first loss of the season for the Bearcats, who didn’t have any turnovers in the game but couldn’t get much going against the Tide’s stingy defense. Cincinnati only managed 74 yards rushing and 218 total yards of offense as their only scores came on two field goals from kicker Cole Smith.

Georgia shut down Michigan’s high-powered offense as they led 27-3 at halftime and handed the Wolverines a 34-11 defeat. Quarterback Stetson Bennett again had a big game, throwing for 313 yards and three touchdowns against one of the top defenses in the country.

Michigan’s three turnovers didn’t help their cause either, with a lost fumble and two interceptions thrown by quarterback Cade McNamara. They also rushed for only 91 yards on 27 carries on the ground. The Bulldogs hope this solid defensive effort will carry over to Monday night’s game against the Tide.

Exciting Games Sum Up the End of Bowl Season

There were some exciting games in a couple of the other bowl games featured this past week. No. 7 Ohio State beat Utah 48-45 in a crazy Rose Bowl game. Quarterback CJ Stroud passed for a school record of 573 yards and six touchdowns in the victory.

Jaxson Smith-Njigba also set a bowl game record with an unbelievable 347 yards receiving and three touchdowns. The Buckeyes trailed for most of the game and came from behind in the fourth quarter to get the win.

In the Playstation Fiesta Bowl, No. 9 Oklahoma State held off No. 5 Notre Dame 37-35. Cowboys Quarterback Spencer Sanders threw for 371 yards and four touchdowns in the victory. He also had 125 rushing yards on 17 carries in his stellar performance.

Brennan Presley caught ten balls from Sanders for 137 yards as Notre Dame came up just short in this game. Quarterback Jack Coan threw for 509 yards and five touchdowns for an impressive day. He threw the ball 68 times in the game, completing 38.

The Fighting Irish had three receivers go over 100-yards, but it wasn’t enough to keep the Cowboys from getting the victory.