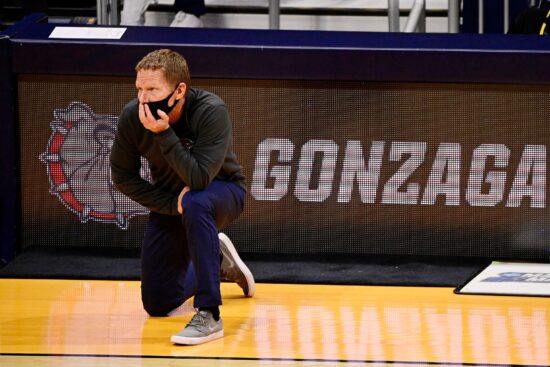 Gonzaga is preparing to face USC in the Elite Eight with the opportunity to head to the Final Four. Also, they are pursuing the opportunity to complete a feat that has not been done since 1976: finish a college basketball season with an unblemished record. That year, the Indiana Hoosiers under legendary head coach Bob Knight went 32-0. Now, Gonzaga is three wins away from accomplishing the feat.

Having no defeats carries a huge element of fascination and magnitude to the NCAA Tournament. Dating back to the first tournament back in 1939, Gonzaga is the 20th team in 82 NCAA tournaments that have been unvanquished before the tournament.

… I’m just telling you, we’re not hung up on the undefeated thing at all.

Gonzaga is the fifth team to head to the NCAA tournament with an undefeated record, joining Indiana State (1979), UNLV (1991), Wichita State (2014), and Kentucky (2015), ever since Indiana’s unblemished season 45 years ago. None of the teams mentioned that came after Indiana won the national championship.

In 1985, The tournament bracket increased to 64 teams, making it a directive to prevail in six games to win it all. It is a rarer feat now as opposed to before 1985.

Looking at Gonzaga’s run thus far, many college basketball writers have Gonzaga cutting down the nets in Indianapolis on April 5th. Of the remaining teams left, Gonzaga has the best points per game (89.3), field goal percentage (.549), free-throw percentage (.833), three-point percentage (.425), and assists per game (20.7).

Since head coach Mark Few was hired in July 1999, Gonzaga has evolved from a beguiling Cinderella program in the latter part of the 1990s, to a dazzling program reaching top 25 status late into the 2000s, then morphing into a significant Final Four-quality establishment over the previous decade.

When Few was asked the potential to make history, his response was that of focus and taking it one game at a time. He said: “Again, I’m just telling you, we’re not hung up on the undefeated thing at all,” Few responded.

Few goes on to say that: “We’ve got to go undefeated from here on out. We’ve got to go 3-0 if we want to win the championship, which is — that’s been our goal all along. But nobody’s talking about the overall undefeated thing at all.”

When probed about how much more the program’s recent acclaim greater validation on just how far the program has truly come. “I hope people realize just how hard it is,” Few acknowledged.