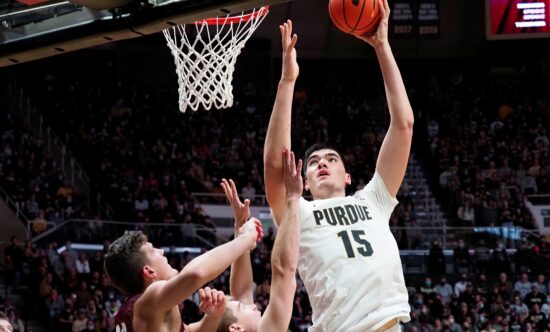 If you’re looking for the best NCAAB predictions for the Purdue vs Michigan game – look no further! – Vegas Odds has you covered.

This game features a matchup between the 19-1 Boilermakers and the 11-8 Wolverines. Purdue rose to #1 in the latest AP Top 25 rankings, now sitting as the only Power-6 team in the country with one loss or fewer. Purdue has had some close calls, but has built a solid lead in the Big-10. Michigan is 4-5 in their last 9 games, but remains in 3rd place in a weak conference. They need a big win here.

Purdue survived a close encounter with Maryland on Sunday, escaping with a 3-point victory at home. Their offense has been a bit of a concern lately. Despite their winning ways, they’ve only averaged 61 points per game over their last 3 games. Thankfully, the Boilermakers can often rely on their defense, which allowed just over 52 ppg in the same span. Purdue’s offense and defense are both led by Junior C Zach Edey, whose 7’4, 295 lb frame has aided him in averaging 21.5 ppg and over 13 rebounds per game on the year.

Michigan sits in 3rd place in the Big-10 with a 5-3 conference record, despite holding an 11-8 overall record. The Wolverines find them themselves in a similar boat as the last couple of seasons. They have a record that’s barely over .500, but tournament-worthy metrics, thanks to a tough non-conference schedule. Unfortunately, the weakness of the Big-10 conference this season could put Michigan in jeopardy. They need C Hunter Dickinson to lock down Zach Edey and give them a chance to get a major résumé-building win here.

Michigan is the type of scrappy team that is certainly capable of upsetting the nation’s top team, especially with home-court advantage. That being said, Purdue looks difficult to beat, especially with the massive Zach Edey dominating the paint each game. I’d favor the Boilermakers to come away with another win, though their struggling offense makes them less likely to cover the spread.