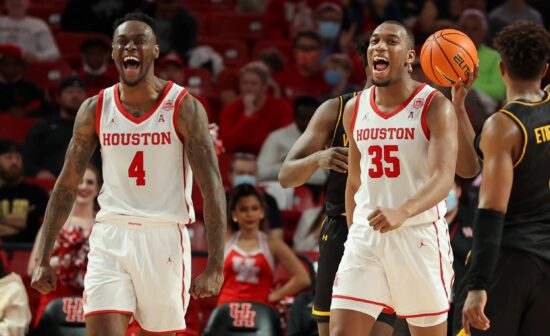 If you’re looking for the best NCAAB predictions for the Houston vs UCF game – look no further! – Vegas Odds has you covered.

This game features a matchup between the 18-2 Cougars and the 13-6 Knights. Houston dropped out of the #1 spot, following a shocking loss to Temple. They are still projected to earn a 1-seed, but have shown some real vulnerabilities. UCF dropped their 2nd straight game, struggling to win on the road. They’ll return home for a crucial matchup here that could save their tournament hopes.

Houston’s 9-game winning streak was snapped by Temple on Sunday. The 1-point defeat on their home court was a major frustration for the Cougars, who entered the game favored by 19 points. The biggest concern was their offense, which shot 34% from the field, scoring only 55 points in total. Houston’s offense ranks 14th in efficiency and has made them vulnerable, as opposed to their 2nd-ranked defense which has been dominant. They need G Marcus Sasser to get back on track, after scoring only 12 points in the loss.

UCF has a fringe chance of sneaking into the NCAA Tournament if they can make a run in AAC play down the stretch. They need to start off with a win here against Houston, who they only lost to by 6 points on the road a month ago. The Knights will need to benefit from their home-court advantage, where they hold an 11-3 record. UCF has a shining Freshman in Forward Taylor Hendricks, who leads the team in scoring with 14.3 ppg. Hendricks also averages 7 rpg, and has posted 4 double-doubles on the season thus far.

UCF played Houston relatively well on the road back in December, and the Cougars’ loss to Temple has proved they are beatable. That being said, I’m still favoring Houston to win this game. They should come out angry, looking to avenge their surprise loss to Temple. As the better and more experienced team, Houston should get the win, though covering another large spread is still no guarantee.