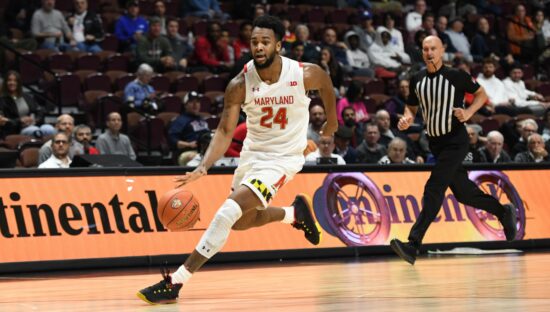 If you’re looking for the best NCAAB predictions for the Wisconsin vs Maryland game – look no further! – Vegas Odds has you covered.

This game features a matchup between the 12-6 Badgers and the 12-7 Terrapins. Wisconsin has now lost 4 of their last 5 games, after starting the season out 11-2. Any more losses will severely threaten their NCAA Tournament hopes. Maryland has gone 4-7 since starting the season out 8-0, sliding towards the bottom of the ACC conference. They desperately need to beat Wisconsin here.

Wisconsin has completely collapsed as of late, falling from #14 in the AP Top 25, and a projected 4-seed, all the way to a NCAA Tournament bubble team. They currently rank #66 in NET and #63 in KenPom, which would put them outside of the tourney field. With only one ranked team in the conference, the Badgers need to win as many games as possible, without much ability to improve their résumé. Wisconsin’s sole win in their 1-4 stretch was at home by 3 points against Penn State. They really need to win this game.

Maryland is 4-7 since an 8-0 start that vaulted them to #13 in the AP Top 25 rankings. Like Wisconsin, they’ve collapsed as of late, sliding towards the bottom of a weak Big-10 conference. The Terrapins have much better metrics than the Badgers though, ranking #45 in NET and #39 in KenPom. They still need to get back on track immediately to stay alive. Maryland is led by Senior G Jahmir Young, who averages 15.5 ppg, 5 rbg, and 3 apg. He’s averaged just over 12 ppg in Maryland’s losses, but nearly 18 ppg in their wins.

Both of these teams are currently projected to land just barely inside the NCAA Tournament field. The winner of this game will get to take a breath before needing yet another win this weekend, while the loser will far further out of contention. Both teams have struggled lately, but Maryland has the home-court advantage and the more favorable metrics. I’ll take the Terrapins to win at home.