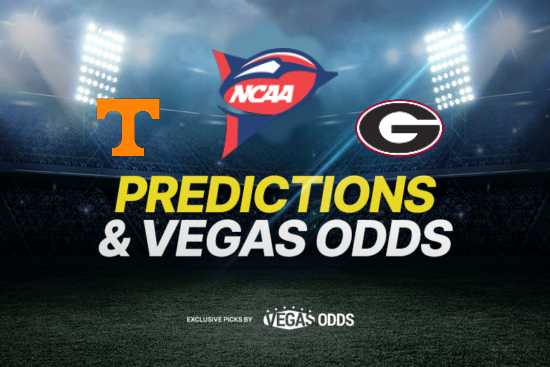 If you’re looking for the best NCAAF predictions for the Tennessee vs Georgia game – look no further! – Vegas Odds has you covered.

This Week 10 game features a matchup between the 8-0 Volunteers and the 8-0 Bulldogs.

Tennessee Having Best Season in Decades

Tennessee dominated Kentucky last week, winning 44-6, and improving to 8-0 on the season. The win was the Volunteers’ 5th win against a ranked team this season, although only two of those teams remain ranked. QB Hendon Hooker finished the game 19 for 25 for 245 yards and 3 TDs. His passing was once again flawless, as he continues his Heisman campaign. Hooker has thrown for 21 TDs to just 1 INT on the season, and ranks 2nd in all of college football with a 91.2 QBR, behind only Ohio State’s QB, C.J. Stroud.

The Volunteers defense was very solid in the win. Their 44-6 trouncing of Kentucky was a great bounce back performance, after allowing 24 points to UT Martin and 49 points to Alabama in the two weeks prior. Tennessee’s defense has been up and down all year.

The defense will be the make or break factor in this game. As good as Hooker is, it’s unlikely that Tennessee scores as much on Georgia as they did on Alabama, so they need their defense to pick up the slack and prevent the Bulldogs from running up the score.

Georgia Looking to Repeat as Champions

Georgia took down Florida 42-20 on Saturday. It wasn’t their most impressive win of the season, but they got the job done regardless. After jumping out to a 28-3 lead in the first half, the Bulldogs allowed Florida to score 17 unanswered points, bringing the game to within one score near the end of the 3rd quarter. Georgia was able to close it out from there, but they’ll need to play a much more complete game to beat Tennessee this week. Their 55-0 win over Vanderbilt in the week prior is where they need to be for this one.

While Georgia’s defense may have allowed Florida to get back into the game, they are still one of the best in college football again this season. Despite losing several starters to April’s NFL Draft, including five first round selections, the Bulldogs defense managed to fill in the gaps and stay at the top this year. A dynamic Hendon Hooker will be by far the toughest test they’ve faced all season. On the other hand, their offense may have improved from last season to this one, and should be equally ready for this week’s brawl.

I’m tempted to pick Tennessee, after they beat Alabama in a similar matchup earlier in the season. The difference is that the Alabama game was at home for the Volunteers, while this one is on the road in Georgia. Home field advantage is massive in college sports, where loud home crowds can easily alter the outcome of the game. An 8.5 point spread in Georgia’s favor certainly reflects that. I think Tennessee can cover the spread, but I like the Bulldogs to emerge victorious at home.