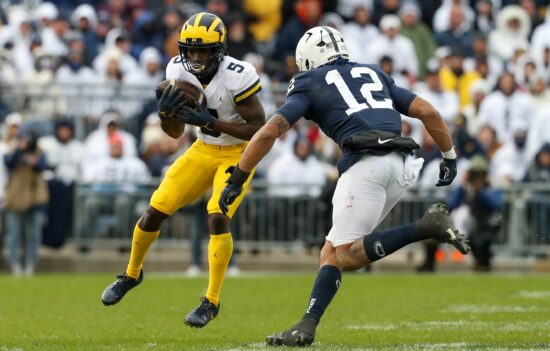 If you’re looking for the best NCAAF predictions for the Penn State vs Michigan game – look no further! – Vegas Odds has you covered.

This Week 7 game features a matchup between the 5-0 Nittany Lions and the 6-0 Wolverines.

The Nittany Lions were beneficiaries of a Week 6 bye, giving them the opportunity to have extra time to rest, practice, and prepare for a season-altering matchup against Michigan. Both teams are undefeated, and the winner is a lock to wind up in the AP’s top 5 spots, with an open path to the CFP where they’d control their own destiny. Since the CFP was first created in 2015, Penn State has never found themselves in such a prime position. They nearly beat the Wolverines last season, but will be on the road this time around.

Penn State is led by senior quarterback Sean Clifford, who is having the best statistical season of his career thus far, although he still ranks 54th in the nation in QBR. The Nittany Lions also have a stringent defense supporting Clifford and the offense in their wins.

Penn State’s most talented overall player is sophomore offensive lineman Olumuyiwa Fashanu. The 6’6, 321 lb Fashanu is very likely to wind up as a first round pick in the 2023 NFL Draft. Many experts have him projected to be selected in the first ten picks.

Michigan Looking For Another CFP

After reaching the College Football Playoff for the first time last season, Michigan is looking to return again this year for their second appearance. Last time, the Wolverines came up short in the CFP semifinals against the soon-after champion Georgia Bulldogs. A rematch with Georgia at some point may be on the minds of some, but right now Michigan needs to focus on hosting a dangerous Penn State squad. They nearly lost to them last season, but escaped with a 4-point victory. Both teams are even tougher this season.

The Wolverines are led by sophomore quarterback J.J. McCarthy, who took over the starting job from senior Cade McNamara, thanks to some stellar performances. McCarthy ranks 12th in the nation in QBR, and the disparity in level between him and Clifford could be the difference maker in this game. Michigan’s defense is also very tough. In 6 games so far this season where they scored a total of 258 points, they allowed just 68 points, good for a +190 point differential. That ranks 2nd in the Big-10, behind only Ohio State.

This should be a fantastic rivalry game between two great teams. It’s nice to see Penn State’s football program finally starting to return to relevance, and this matchup against Michigan could be their first staple win of the new era. That being said, with the crowd noise at the Big House, I’m leaning towards Michigan in this game. It’s hard to overlook better QB play and home-field advantage. Penn State may score more on Michigan than any team they’ve faced so far, but I see the Wolverines emerging as the victors.