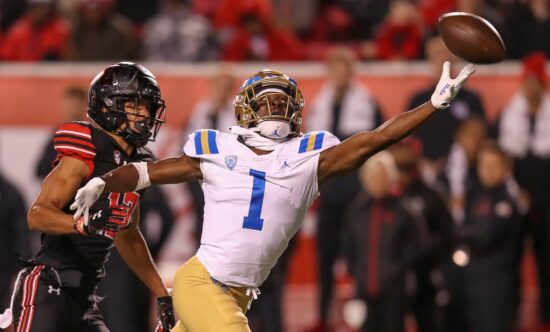 If you’re looking for the best NCAAF predictions for the Utah vs UCLA game – look no further! – Vegas Odds has you covered.

This Week 6 game features a matchup between the 4-1 Utes and the 5-0 Bruins.

Utah Back on Track

The Utes bounced back from a disappointing Week 1 loss against Florida, racking up four straight victories in the subsequent weeks. They managed to outscore their opponents 184-43 in those four games. Last week, Utah blew by Oregon State, 42-16. Quarterback Cameron Rising finished the game 19 for 25 for 199 yards and 3 touchdowns, sealing the win for the Utes. On defense, Utah forced four Oregon State turnovers, but were unable to accumulate any sacks, something they’ll need to improve on against UCLA.

This week, Utah has their toughest test of the season as they head to Los Angeles to take on 5-0 UCLA. If they win, they’ll vault into the top 10 of the AP rankings, keeping their college football playoff hopes alive. A loss, on the other hand, would drop the Utes to 4-2.

Quarterback Cameron Rising currently ranks 6th in all of college football with an 87.1 QBR. Rising has been effective not only in the air, but on the ground as well. In last week’s win over the Beavers, he rushed 7 times for 73 yards and a touchdown.

The Bruins didn’t enter this season with the highest expectations, still working to rebuild their way back to a competitive level after a stretch of bad seasons. That being said, those days may be over for UCLA, who improved to 5-0 on the season last week with a dominant win over #15 Washington. Aside from a Week 3 struggle against South Alabama, where they won by just 1 point on a game-winning FG, the Bruins have looked impressive this season. They’ll host #11 Utah next for their biggest game of the year thus far.

UCLA’s defense will be the biggest question mark for this game against Utah. While quarterback Dorian Thompson-Robinson has college football’s 7th best QBR, the Bruins defense ranks 29th in the nation. The defense is by no means lackluster, but they looked the most vulnerable against Washington and South Alabama when they had the lead. UCLA will need to avoid falling into the trap of easing up too early if they get an early lead against the offensively proficient Utes.

For much of the season, it’s been hard to tell whether UCLA’s near-loss against South Alabama was just a hiccup or not. They haven’t faced a really tough team yet to answer that question. Washington’s rank last week was inflated by a win against an overrated Michigan State team, so they weren’t quite as tough as expected. If their game against South Alabama really was a fluke, UCLA should hang around and may even win it, if not Utah will run away with it. I’d favor the Utes in close one.