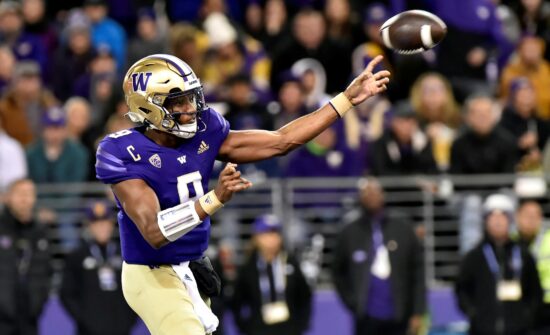 If you’re looking for the best NCAAF predictions for the Washington vs Texas game – look no further! – Vegas Odds has you covered.

The 2022 Alamo Bowl features a matchup between the 10-2 Huskies and the 8-4 Longhorns. Washington exceeded expectations this season, winning 6 straight games down the stretch. They picked up notable wins against #14 Oregon State and #15 Oregon during that span, but also took a loss to 3-9 Arizona State prior to it. Texas worked through a very difficult schedule to finish the season 8-4.

Washington managed to finish in a 3-way tie for 2nd place in the Pac-12, finishing the regular season 10-2. Despite holding the best overall record among the 3 teams, Washington lost a disadvantageous tiebreaker setup, and missed out on the Pac-12 title game. Because of that, they finished 1 spot too low in the rankings to qualify for an NY6 bowl. The Huskies finished the season red-hot and should have a lot to prove to the Pac-12 and the CFP committee in this game, after being left out of a bigger bowl game this season.

Texas nearly upset Alabama in the second game of the season, losing 20-19 in a thrilling game. They also picked up losses in road games against Texas Tech, Oklahoma State, and TCU, all by just one score. A 34-27 road win over #9 Kansas State is the highlight of their schedule. Besides their win over Kansas State, Texas wasn’t able to pick up any more ranked victories. Their competitiveness in tough games is a good indication, but their inability to close out those games, especially the two unranked losses, raises concerns.

I’m a bit surprised Texas is the Vegas favorite in this game. They have two more losses than Washington on the season, and are ranked 8 spots lower in the CFP Rankings. Beyond that, they have less ranked wins and more unranked losses than Washington. The numbers don’t mean everything, but even from watching these two teams this season, I would have picked the Huskies out as the favorite. This should be a very competitive and close game, but I ultimately see Washington getting the victory over the Longhorns.