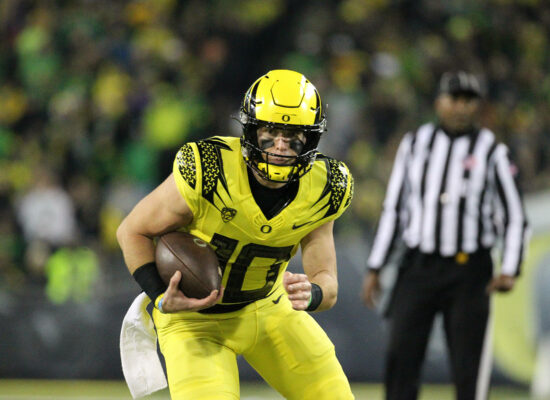 If you’re in search of the latest Oregon vs North Carolina prediction, look no further because Vegas Odds has you covered.

The Oregon Ducks and North Carolina Tar Heels both feature electric offenses and this game should be full of points.

Do you want to see a matchup of teams that can score points? Here it is, and it is played in the home of the San Diego Padres — yes, a baseball stadium.

Mar’Keise Irving (909 yards) and Noah Whittington (752 yards) form a dangerous 1-2 running back punch, and Troy Franklin had an excellent season with eight scores and 867 yards.

Nix got banged up in the Civil War loss to Oregon State that disrupted a chance of a Pac-12 title game appearance, but Lanning insists his QB is ready to go.

Drake Maye, who decided to return to Chapel Hill for another season in 2023 despite a ton of interest, is a Heisman Trophy candidate next season. In 2022, he finished with 4,115 yards and 35 scores in the air while leading the team with 653 yards rushing and the second-most rushing scores (7).

Maye had the fourth-most passing yards in the nation, and he was top 10 in touchdowns as well. He is the heart and soul of this team, and Mack Brown is excited about having Maye back in 2023.

Wide receiver Josh Downs is already drawing first-round buzz, and he had 1,029 yards with 11 touchdowns as he became Maye’s favorite option in the passing game. Unfortunately, Downs has decided not to suit up in the game as he prepares for the 2023 NFL Draft, and that is a massive loss for North Carolina.

If Josh Downs was suiting up for UNC, this would be a much tougher battle for Oregon. However, Drake Maye will be without his best option by far, and the freshman QB will have even more weight on his shoulders than usual.

Oregon was one win away from the Pac-12 title game for a reason, and Dan Lanning would love to finish his first year with the Ducks with 10 wins. The Ducks are heavy favorites and they should have a ton of fans in San Diego, so things could get ugly in an offensive showdown.