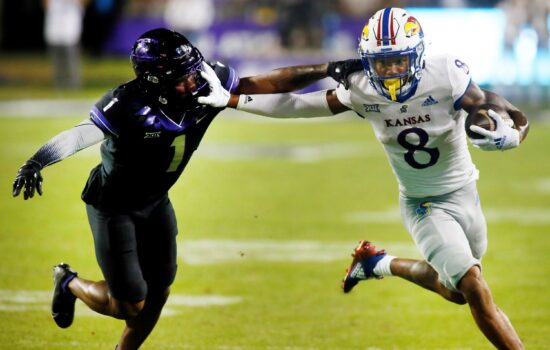 If you’re looking for the best NCAAF predictions for the TCU vs Kansas game – look no further! – Vegas Odds has you covered.

This Week 6 game features a matchup between the 4-0 Horned Frogs and the 5-0 Jayhawks.

The Horned Frogs improved to 4-0 last week with an impressive upset win over #18 Oklahoma. TCU finished the game with a 31-point lead, dominating the Sooners from start to finish. Their offense is the best it has been in several years, averaging 48.5 points per game so far this season. TCU’s quarterback, Max Duggan, ranks 4th in all of college football with a 90.4 QBR. Duggan has completed 70 of 94 passes for 997 yards, 11 touchdowns, and 0 interceptions this year. He threw for 302 yards and 3 TDs against Oklahoma.

TCU’s defense has been one of the biggest surprises this season. While the offense’s success is less of a revelation, their defensive improvements have turned them into a dangerous team. TCU tallied 4 sacks and forced a fumble in their win over the Sooners.

The Horned Frogs forced the two opposing quarterbacks that Oklahoma sent out to go a combined 14 for 32 for 176 yards and no touchdowns. Their secondary currently ranks atop the Big-12 conference. If TCU continues to completely outplay opponents in the passing game, they’ll continue to win games with ease.

Kansas is 5-0 in football for the first time since 2009. They finally got ranked in the AP Poll as well, jumping from unranked to #19 in the country over the past week. At last, the Jayhawks boast a competitive team after a decade of being one of the worst Division I teams in all of college football. Last week, the defense carried the team to a win, emerging victorious in a 14-11 game against Iowa State. The previous week, the offense was the key to success, leading the team to a 35-27 win over Duke.

The Jayhawks get by far their toughest matchup of the season thus far against TCU. Kansas will host ESPN’s College Gameday show for this game. In light of their first College Gameday host, 5-0 start, and AP Top 25 ranking in years, Kansas announced a $300 million plan to renovate their stadium. With plans to completely change their brand of football to one that’s seen as competitive for the foreseeable future, the Jayhawks get the perfect opportunity to reign in the new era with this home matchup against #17 TCU.

As exciting as the story around Kansas is, I’m still not completely sold on them as a Top 20 team. Being 5-0 for a program that struggled to rack up any wins for so long is a major accomplishment and worth the recognition. That being said, wins against Tennessee Tech, West Virginia, Houston, Duke, and Iowa State haven’t fully sold me on the Jayhawks quite yet. I like TCU to get the win in this one, making an argument for a Top 10 ranking next week.