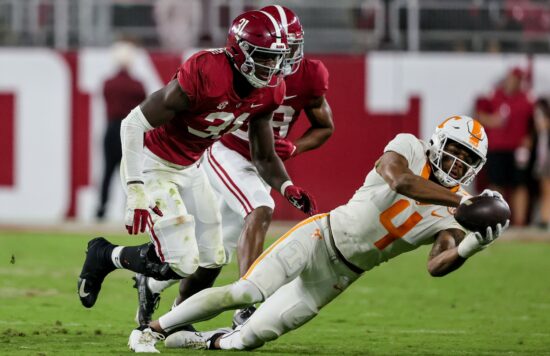 If you’re looking for the best NCAAF predictions for the Alabama vs Tennessee game – look no further! – Vegas Odds has you covered.

This Week 7 game features a matchup between the 6-0 Crimson Tide and the 5-0 Volunteers.

After defeating Texas A&M by a 4-point margin last week, the Crimson Tide ended up dropping a spot in the AP Top 25 rankings. While #1 Georgia, and #2 Ohio State have dominated the majority of their games, Alabama has now had two close calls this season, resulting in their #3 ranking. They’ll attempt to prove the AP voters wrong this week, heading on the road to face the #6 ranked Tennessee Volunteers. A win against Tennessee would likely vault Alabama right back into the top spot of the rankings next week.

Alabama is led by junior quarterback Bryce Young. Currently, Young is projected to be the 2nd-overall pick in the 2023 NFL Draft, behind only Ohio State quarterback C.J. Stroud. So far this season, he ranks 9th in all of college football in QBR, and 2nd in the SEC.

Young has been dealing with a shoulder injury. He practiced some this week, but his status for this game is still considered to be up in the air. If Young plays, as I believe he most likely will, he’ll need to avoid succumbing to mistakes effectuated by a nagging injury.

Tennessee Having a Great Season

The Volunteers are currently ranked #6 in the country, their highest ranking since 2003. They owe much of their success to senior quarterback Hendon Hooker, who currently ranks 3rd in the country in QBR and 1st in the SEC conference. Hooker’s numbers on the season are beyond impressive. He’s thrown for a 70% completion rate, with 10 touchdowns, and 0 interceptions. He’s also rushed for 231 yards and 3 TDs. Hooker’s ability to continue his success in this game against a stifling Alabama defense will be a key matchup.

Tennessee’s defense is no slouch either, although they have had some up and down performances. In game 1, game 3, and game 5 of the season, the odd games, they allowed a total of just 29 points, equivalent to fewer than 10 points per game. Meanwhile, in game 2 and game 4 of the season, the even games, they allowed 60 total points, equivalent to 30 points per game. Tennessee must avoid continuing this pattern in game 6 against the Crimson Tide. Last year, they surrendered 52 points in their game against Alabama.

It’s tempting to pick Tennessee at home here, especially considering how Alabama played in their games against Texas A&M and Texas. I just don’t feel confident enough yet in the Volunteers to pick them over a team that wins as frequently as the Crimson Tide. QB Hendon Hooker has had an incredible start to the season, but I think Alabama’s defense will be enough of a test to keep him from another perfect game. Anything less than perfect won’t get it done against Alabama, but covering the spread isn’t impossible.