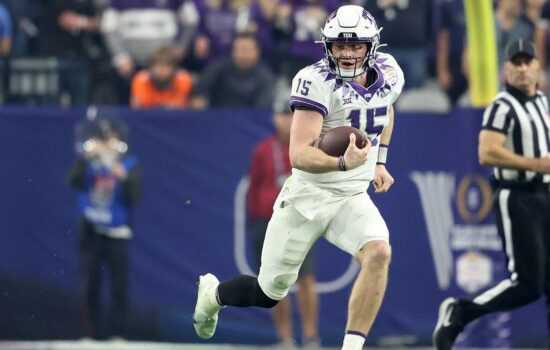 If you’re looking for the best NCAAF predictions for the TCU vs Georgia game – look no further! – Vegas Odds has you covered.

The 2022-23 National Championship features a matchup between the 13-1 Horned Frogs and the 14-0 Bulldogs. TCU continues to exceed expectations, becoming the first team to make the College Football Playoff after opening the season unranked. Meanwhile, Georgia was ranked wire-to-wire, looking to become the first team to win back-to-back CFP titles. They are the final undefeated team.

TCU defeated Michigan in the Fiesta Bowl, advancing to the CFP finals. They allowed a 54-yard run by Michigan RB Donovan Edwards on the first play of the game. However, a touchdown-saving tackle gave them the opportunity to stop the Wolverines on 4th down and keep them from scoring. The Horned Frogs went 3-and-out on their first possession, but got a game-changing pick-six on the ensuing Michigan drive. TCU would jump out to a 21-3 lead and never look back. They’ll need an equally strong start against the Bulldogs here.

Georgia managed to squeak past Ohio State, 42-41, making their 2nd consecutive CFP final. They played a much less complete game than many expected, entering the 4th quarter trailing the Buckeyes 38-24. The Bulldogs managed to surge back and take the lead in the 4th quarter, holding on for the win thanks to a missed 50-yard game winning FG attempt by Ohio State. Georgia’s defense has regressed quite a bit since last season after losing multiple key pieces in the NFL Draft. They’ll have to get back on track against TCU.

The opening line for this game favors Georgia by two TDs. That seems excessive to me, especially considering the fact that TCU’s only loss came in overtime. They haven’t lost by more than a single score all season. Last year’s Georgia team that had a historically strong defense, and dominated the opposition, may have been able to win by 14+ points, but I’m far less confident in this year’s team. While I’m not certain that Georgia will lose straight up, I’m very confident that they won’t blow TCU out. I expect a close championship.