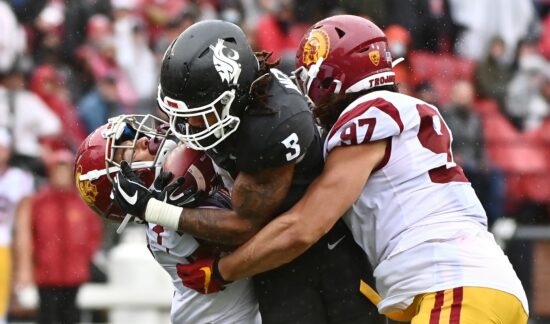 If you’re looking for the best NCAAF predictions for the Washington State vs USC game – look no further! – Vegas Odds has you covered.

This Week 6 game features a matchup between the 4-1 Cougars and the 5-0 Trojans.

The Cougars had no problems getting past Cal during their Homecoming week. Washington State led from start to finish, thanks to another fantastic defensive performance. In their 4 wins so far this season, the Cougars have allowed a total of 47 points, about 12 points per game. However, in their loss against Oregon, they allowed 44 points, 21 of which came in the final 10 minutes of the game. Washington State will need their defense to avoid a similar late-game collapse against a very tough USC team.

Washington State may have allowed 44 points in the loss against Oregon, but they also scored 41 points of their own, losing the game by a close margin. The Cougars also led for much of that game, looking like the better team until their 4th quarter collapse.

The Cougars were a 17-point underdog in the Oregon game that they nearly won. They’re 4-0 against the spread since their sluggish opener against Idaho, and are likely to hang around in this game as long as inexperienced quarterback Cameron Ward can avoid turning the ball over. Washington State is a 13-point underdog for this matchup against USC.

The Trojans currently rank #6 in the country in the AP Top 25 poll, following another strong win. USC is now 5-0, and is considered the favorite to win the Pac-12 conference. They also have their eyes set on the team’s first-ever College Football Playoff appearance, which is a real possibility. In this week’s game, USC will be looking to jump out to a quick lead and never look back. They haven’t lost at home to the Cougars since 2011, but lost a road game in 2017 in a similar season where they had playoff aspirations.

USC is stacked with talent, but a mediocre schedule thus far has made it difficult to fully evaluate them. Wins against Rice, Fresno State, Stanford, and Arizona State were to be expected of the Trojans. Their toughest game so far, at Oregon State, resulted in a 17-14 win that nearly went in the Beavers favor instead. Washington State will be USC’s toughest test of the season so far. They’ll need to be careful to avoid falling into a trap game, with eyes on a matchup at #12 Utah next week.

I’m really tempted to pick the Cougars with the upset in this one. I think this game is the perfect recipe for a trap game, with USC likely to be thinking about their game against Utah. While Washington State has experienced games against #19 Wisconsin and #15 Oregon, USC hasn’t had any real tough tests yet this season. That all favors the Cougars, and if they were at home for this game I’d pick them, but I still like USC to prevail in a close one.