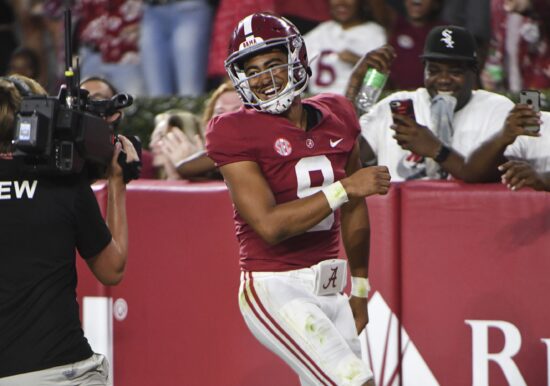 Are the Alabama Crimson Tide facing one of only true tests of the season on Saturday against the Texas Longhorns in Austin, or is this going to be just another blowout for Nick Saban’s team? Alabama is nearly a three TD favorite on the Vegas odds for Saturday afternoon’s game but an upset could be on the menu with the ESPN Gameday crew in attendance on the UT campus.

This game does feature some familiarity as Texas coach Steve Sarkisian was the former offensive coordinator at Alabama. The ‘Horns were just 5-7 in Sarkisian’s debut last season, but they are off on the right foot in 2022 with a 52-10 victory over Louisiana-Monroe in week one. That being said the Crimson Tide are going to be favored in every game this season just like they are in the Alabama vs Texas matchup this weekend.

Archie Griffin is the only two-time Heisman trophy winner in college football history, but Alabama’s Bryce Young is on pace to join the former Ohio State running back. Young won the award for the best player in college football last season after throwing for 4,872 yards with 47 TDs to 7 INT, and he torched Utah State for 5 TD passes and a score on the ground last week.

Young probably won’t have a lot of opportunities to play a full game this season with the Crimson Tide expected to cruise to the SEC Championship game undefeated, but Saturday’s Alabama vs Texas matchup could be closer than expected. This game is early in the season, it’s the Tide’s first road game, and Alabama doesn’t have a ton of film on Texas freshman QB Quinn Ewers.

For as good as the Alabama offense was in scoring 55 points in three quarters, their defense also shut out a Utah State team that won the Mountain West in last year’s 11-win season. The Crimson Tide were -41.5 favorites and held the Aggies to just 57 yards passing and 79 on the ground.

Ewers is an Ohio State transfer who is back home as an Eastlake, Texas graduate. He was the top prospect in the 2022 class before reclassifying and enrolling early in Columbus, where he took just two snaps last year. In his first extended action Ewers threw for 225 yards with 2 TD and an INT last week.

The quality of competition ramps up tremendously for Ewers on Saturday afternoon going from UL-Monroe to Alabama. Crimson Tide edge rusher Will Anderson is a projected top three pick in next year’s NFL draft while CB Eli Ricks and LB Henry To’oTo’o could probably start in the pros this weekend. If Ewers can somehow navigate this upset it would be on par with Johnny Manziel’s signature win over the Tide in 2012.

Of course even if Ewers is great in the Alabama vs Texas matchup the Longhorns defense still has to figure out a way to slow down Young and the Crimson Tide offense. Alabama ran for 278 yards last weekend and threw for 281. The Longhorns were the 100th ranked defense in total yards in 2021 (426.4 ypg).

Get used to Alabama being a huge favorite in every game this season, but this is a team that did get complacent at times last year. In 2021 the Crimson Tide squeaked out close wins against LSU (20-14), Arkansas (42-35), and Auburn (22-20) while they were 20+ point favorites so you have to take the Longhorns here.