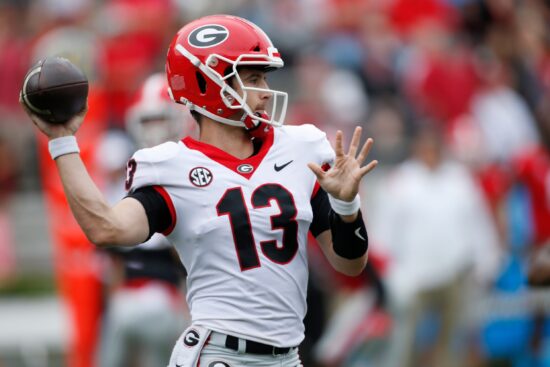 The Georgia Bulldogs don’t rebuild, they reload but we will see how that works when the 2022 season gets underway Saturday night against the Oregon Ducks in Atlanta. The Bulldogs were able to avenge an SEC championship game loss to Alabama by beating the Crimson Tide 33-18 to claim the school’s third national championship in January.

The Ducks will try to pull off the upset as +16.5 underdogs on the Vegas odds. This is a “neutral site” game but there’s no doubt we are in SEC country on Saturday night at Mercedes-Benz Stadium. Dan Lanning brings his new team into the Oregon vs Georgia matchup after serving as the Bulldogs co-defensive coordinator from 2019-21 so he should know how to attack this squad.

Not only is Lanning very familiar with Georgia as the co-architect of the #2 defense in the country last season, so is new Ducks QB Bo Nix, who was a three year starter in the SEC at Auburn. Nix threw for 2,294 yards last season with 11 TD to 3 INT including going 21/38 for 217 yards and an INT in Auburn’s 34-10 loss to UGA.

While few people give the Ducks a chance in the Oregon vs Georgia game, this is an OU team that beat Ohio State 35-28 last year in Columbus. That was part of a 9-1 start that had the Ducks all the way up to #3 in the rankings before they dropped two of their last three in the regular season and then fell 47-32 to Oklahoma in the Alamo Bowl.

Oregon did not fire former head coach Mario Cristobal, instead the Miami native decided to return home to be the head coach of the Hurricanes. That puts Lanning in a little more difficult situation but he retains a lot of Cristobal’s talent including a deep and talented offensive line and four upper tier linebackers. Plus, Lanning is going to be extra hungry in his first ever head coaching gig and against his former mentor Kirby Smart.

Georgia Plugs Next Group In

Georgia lost 15 players to the NFL this offseason and had another 13 transfer. The Bulldogs had a record 5 defensive players taken in the first round of the draft, so gone are Travon Walker, Jordan Davis, Quay Walker, Devonte Wyatt, and Lewis Cine. That unit helped Georgia rank #2 in total yards, #3 against the pass, #4 against the rush, and set a record by allowing a mere 6.9 ppg during the regular season.

Of course Georgia will just welcome in the next batch of NFL prospects to their defense, starting with Jalen Carter who is a projected top 5 pick in 2023. Kelee Ringo and Nolan Smith are also projected to be first round picks next season so the Bulldogs defense seems like it will be just fine.

As always the main concern with Georgia is their offense, and QB Stetson Bennett IV has to prove he simply didn’t catch lightning in a bottle in leading UGA to the title last year. Bennett threw for 2,862 yards with 29 TD and 7 INT last season but some still consider him nothing more than a game manager.

It’s hard to envision Smart running up the score on his former defensive coordinator but that just means the final won’t be 45-10 and instead more like 26-0. This is a home game for the Bulldogs even on a neutral field in Atlanta, and fans are ready to see their reigning National Champions for the first time to kick off 2022. Just a tough spot for the Ducks.