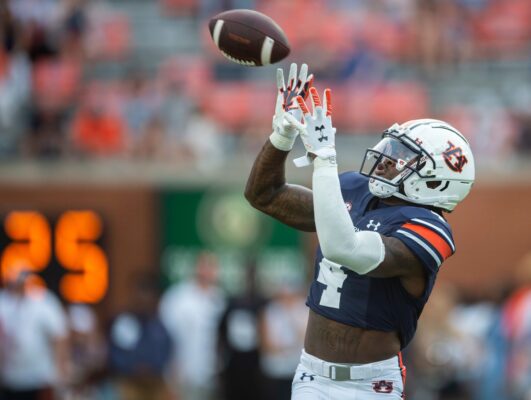 Revenge is on the menu on Saturday at Jordan-Hare Stadium in a bizarro game where the Auburn Tigers were ranked #22 last year in their visit to Penn State but ended up losing 28-20. This season it’s the Nittany Lions ranked #22 on the road with Auburn looking to steal one even as +3.5 home underdogs on the Vegas odds.

We still don’t know much about the Tigers heading into the Penn State Auburn preview, because the home team has only played Mercer and San Jose State this season. PSU ran through Ohio 46-10 last week, but survived an early challenge in a 35-31 win at Purdue in West Lafayette in week one – a tough road test against a great offense.

Jordan-Hare Stadium is going to be a raucous atmosphere on Saturday afternoon as the school has promoted an “Orange Out” to counter Penn State’s “Whiteout” last season. If there’s any QB that can survive in a hostile environment it’s the Nittany Lions’ sixth year senior Sean Clifford who is off to an incredible start this season.

Clifford has led Penn State to a 40.5 ppg scoring average this season, throwing for 282 and 4 TDs in the win over Purdue and 213 and a TD last week against Ohio. One of the most optimistic things about last weekend’s victory was Nick Singleton running for 179 yards and 2 TDs but there’s a big difference between the Ohio defense and Auburn’s.

Can Auburn Defense Guide the Win?

The Tigers are 2-0, but they are supposed to be after playing Mercer (42-16) as a -30 point favorite and San Jose State (24-16) at -24 on the Vegas odds. Instead of feeling energetic and motivated with the undefeated record, some fans are wondering if last week’s 8-point victory over SJSU was harder than it was supposed to be.

Regardless of how the first two games of the season have played out, the Tigers have to like where their defense is at, especially against the run where their 70.0 ypg allowed is 12th best in the country. When you can stop the opponent from running, and control the trenches yourself (Auburn 247.5 rush ypg) that’s a winning formula.

Purdue’s Aidan O’Connell threw for 356 yards against the Penn State defense in week one, but he was also just 29/58 passing. Ohio as a team only completed 17/40 against the Nittany Lions so this secondary is dialed in. That could present a problem for Auburn if they cannot get Tank Bigsby (198 yards, 3 TDs) and the ground game going. Tigers QB TJ Finley threw 2 INTs against Mercer of all teams so Auburn doesn’t have a ton of faith in their passing game.

This is going to be a rocking crowd at Jordan-Hare Stadium but Penn State was able to handle the adversity in their week one victory at Purdue. The Tigers haven’t been overly impressive in their two wins to start the season but this is going to be an old fashion slobberknocker and the total is the way to play this one.