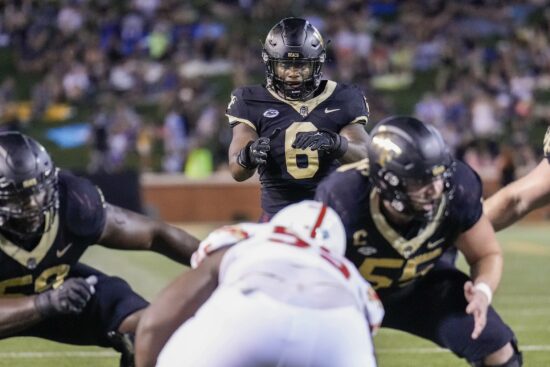 The Wake Forest Demon Deacons welcome star QB Sam Hartman back this week after he missed the season opener after having a blood clot removed. Wake was able to get a 44-10 victory over VMI last Thursday even without Hartman, but a QB who threw for 4,228 yards with 39 TDs in 2021 is certainly welcomed back.

The Wake Forest vs Vanderbilt matchup definitely has the potential to be high scoring after the Commodores have averaged 52.5 ppg in their 2-0 start. Vandy had a closer game than expected last weekend with a 42-31 victory over Elon as -18.5 favorites, but they opened the season with a 63-10 victory in Hawaii which can be a tough place to get a road victory. The Demon Deacons are a -12.5 favorite on the road Saturday afternoon.

Hartman Back in the Saddle for Wake

The Demon Deacons put up 44 points in their season opener as Mitch Griffis threw for 288 yards and 3 TDs while the team ran for another 212 yards fueled by Christian Turner toting the rock 13 times for 100 yards and two scores.

As efficient as the Demon Deacons looked last week they are glad to have Hartman cleared for Saturday’s Wake Forest vs Vanderbilt matchup. Hartman was a major driving force behind last year’s 11-3 record, throwing for 304 yards with 3 TDs in the 38-10 Gator Bowl win over Rutgers. Hartman had 3+ TD passes in 7 of his last 9 games last season but also threw 4 INTs in the 45-21 loss to Pittsburgh in the ACC Championship Game.

Time will tell if Hartman shows any rust from being out since his surgery on August 9th to have his blood clot – known as Paget-Schroetter syndrome which is caused by repeated strenuous activity – removed. Either way the Demon Deacons will likely have to rely more on their defense this week. That unit held VMI to 139 yards passing and 83 yards rushing last week but were just 99th in yards allowed last year (424.2 ypg).

Is Vanderbilt Offense for Real?

It’s been awhile since there was buzz around a Vanderbilt game but that’s where we’re at with the Commodores starting the season 2-0 and the #23 Demon Deacons coming to Nashville. After two games Vandy is the #16 scoring team in the country putting up 52.5 ppg led by the 11th ranked rush offense that has churned out 291.5 ypg.

Saturday’s game will be a real test to see if this is a legit Commodores offensive attack. QB Mike Wright has started the year with 6 TD to 0 INT while also running for 247 and 4 scores. Wright accounted for all six TDs last week against Elon (4 pass, 2 rush) setting a school record for most touchdowns in a game.

Vanderbilt may get a break with Hartman possibly rusty after a month off for Wake Forest, but then again the Demon Deacons QB could have a seamless transition based on Elon throwing for 343 yards against the Commodores last week. Hawaii threw for 250 in the opener against Vandy as well so Hartman should put up big numbers in his season debut.

Could this game be an upset watch for the Demon Deacons? It sure seems like it with the start that Wright is off to for Vandy and the fact that Hartman is making his season debut for Wake. The Commodores already having two games under their belt is also an advantage as is being at home in what many are calling the first meaningful game for Vandy since their last 2-0 start in 2017.