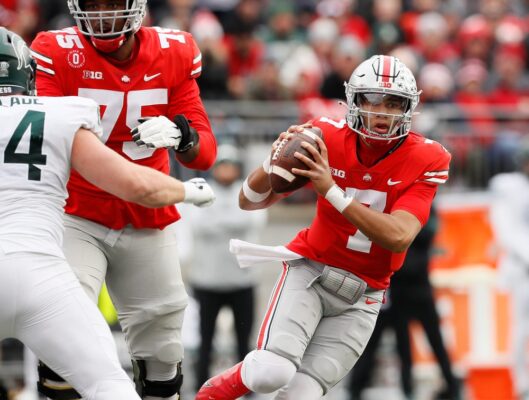 The premier matchup of the college football opening weekend sees the #5 Notre Dame Fighting Irish visiting Columbus to take on the #2 Ohio State Buckeyes. Both teams were 11-2 last season, disappointing for each after they both made the the 2021 CFP. Ohio State expects to be right back there again with coach Ryan Day and Heisman candidate quarterback C.J. Stroud both returning.

The Irish have some more tepid expectations for the upcoming year, with Marcus Freeman replacing Brian Kelly (who is off to LSU) as head coach and QB Tyler Buchner making his first collegiate start on Saturday in the Notre Dame vs Ohio State matchup. It’s not a huge surprise that OSU is a -17.5 favorite on the Vegas odds even in a matchup of preseason top 5 teams.

New Notre Dame coach Marcus Freeman has said that sentimentality is taking a back seat as the former Ohio State linebacker visits his old stomping grounds for Saturday’s clash. Freeman made a meteoric rise, serving just one year as the Fighting Irish defensive coordinator in 2021, leading the team to ranking #10 in the nation in points allowed (18.3).

Freeman is well respected in the locker room and his new defensive coordinator is Al Golden who has head coaching experience at Miami (OH) and Temple. The Irish return a lot of talent on that side of the ball too as Edge rusher Isaiah Foskey is a projected top 10 pick in the NFL, and safety Brandon Joseph is expected to follow 2021 star Kyle Hamilton as a first round safety.

With such a talented defense it’s somewhat surprising that Notre Dame feels content going with Buchner at QB after relying on senior Jack Coan last season. Fighting Irish brass must like what they see in the sophomore who did play in 10 games last year, going 21/35 with 3 TD and 3 INT. Buchner has a nice safety blanket in TE Michael Mayer who had 71 catches for 840 yards last season.

The Notre Dame offense is going to be hit or miss this season, but the Buckeyes cannot afford to take this defense lightly. This is a nice early season test for OSU, whose CFP playoff chances took a hit early last year in a 35-28 loss to Oregon in week two in Columbus.

While the Fighting Irish defense is solid, this is an Ohio State team that is expected to be next level in 2022. That is all kick-started by QB C.J. Stroud, who some would say is the Heisman Trophy favorite after throwing for 4.435 yards last season with 44 TD and 6 INT. When we last saw Stroud he was throwing for 573 yards and 6 TD in the 48-45 win over Utah – also a really good defense – in the Rose Bowl.

The Buckeyes had a top 20 rushing defense in the country last season, so it looks like the inexperienced Buchner is going to try and keep Notre Dame in this game through the air. What makes Ohio State especially difficult to game plan against on Saturday night is new defensive coordinator Jim Knowles, brought in from Oklahoma State after producing the #3 total defense in the country last season with the Cowboys.

The addition of Knowles and what he can do with his schemes and surprises with the amount of talent that Ohio State recruits is actually kind of scary for opponents. Buchner is going to be overwhelmed in his first collegiate start in front of 100,000 people and the Notre Dame defense will eventually wear down from being on the field so long.