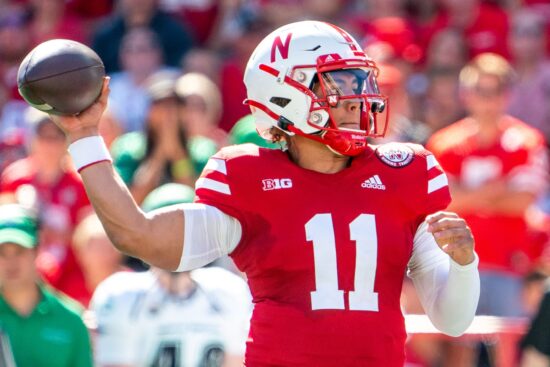 Even though these two teams met in 2021 on the 50th anniversary of the “Game of the Century” the Oklahoma Sooners meeting the Nebraska Cornhuskers is always special because of their rivalries Nebraska joining the Big Ten in 2011 means the teams don’t meet up as much anymore, but the Sooners have definitely been the more successful program over the past decade.

An example of how mediocre Nebraska has been as of late is their firing of Scott Frost this week after a 45-42 loss to Georgia Southern this week when the Huskers were over three TD home favorites on the Vegas odds. Despite Nebraska being in total disarray, OU is still just a -10.5 favorite in the Oklahoma Nebraska preview.

There are some fans who are saying that Oklahoma has started their season playing too conservative as Brent Venables takes over head coaching duties for Lincoln Riley who is off to USC. How can you really complain about a 2-0 record and a 39.0 ppg average even though both of the Sooners opponents (Kent State, UTEP) were not power 5 schools.

SEE ALSO: Syracuse looks to get to 3-0 in a tough game with Purdue

OU was a 30+ point favorite in each of their first two games and the Oklahoma Nebraska preview is the first road game for the Sooners. Dillon Gabriel has had a solid start to his tenure in Norman, as the UCF transfer has completed 70.6% of his passes with 5 TD and 0 INT. Eric Gray had 100+ yards rushing in the game vs. UTEP and Marcus Major has 3 TDs on the ground this year so this is a diverse offense.

The Sooners have only allowed 8.0 ppg this season, but they also gave up 288 yards passing to UTEP and 164 yards on the ground against Kent State. Throw in the fact that Nebraska will be reinvigorated by a coaching change and this being the first road game of the season for Oklahoma and there is a bit of a chance at an upset in this one.

Frost came to Nebraska after leading UCF to an undefeated 13-0 season in 2017. Frost was just 16-31 at Nebraska though and part of the reason he was fired was due to a 5-22 record in one-score games. The Huskers were 3-9 last season, but 8 of those losses were one score affairs.

The breaking point for Nebraska administration was last week’s 45-42 home loss to Georgia Southern when Nebraska was a -23 point favorite. Another former Nebraska QB Mickey Joseph will now take over the head coaching duties, and he’s got some extra incentive after leading the Huskers to an 8-0 start in 1990 before a late hit out of bounds resulted in him breaking his leg and never quite playing the same ever again.

Texas transfer Casey Thompson has had an interesting start to his time in Lincoln, throwing 4 TDs and 3 INTs through three games. He has had a couple of 300+ yard games passing and the coaching change shouldn’t affect Thompson’s production considering Joseph is the passing game coordinator.

Oklahoma seems like the much more stable team here but the line being just -10.5 is interesting. Nebraska kept things close in last year’s meeting but they had Adrian Martinez who completed 19/26 passes with a TD and also had a running score. Thompson has that potential through the air, and the Vegas odds are saying that at the very least the Cornhuskers keep this one close.