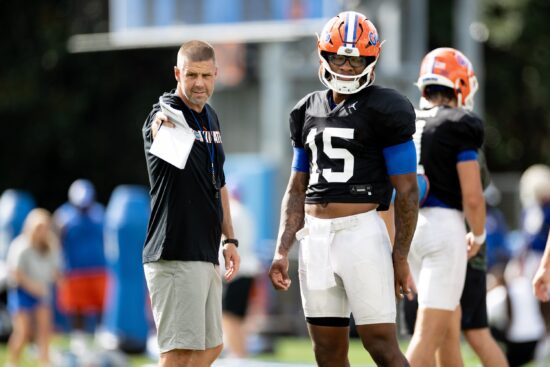 Two teams with varying levels of turnover in the offseason meet up in the season opener as the Utah Utes visit the Florida Gators. Utah was 10-4 a year ago, winning the Pac-12 before suffering a 48-45 loss to Ohio State in a very entertaining Rose Bowl game. 17 starters from that squad return for 2022.

Florida is in somewhat of a rebuild as head coach Dan Mullen didn’t even make it through the season as the Gators were 6-7 in 2021 which culminated in an embarrassing 29-17 loss to Central Florida in the Gasparilla Bowl. Billy Napier was brought in as the new coach to turn things around, but his team is a +2.5 underdog in the Utah vs Florida matchup according to the Vegas odds.

Utah has a veteran laden team that took Ohio State to the limit in the Rose Bowl last season. That being said, the Utes haven’t played an SEC team since 2009 (a win over Alabama in the Sugar Bowl) and have to travel to 90° Gainesville for their season opener. Kyle Whittingham’s team’s depth will be tested in the Utah vs Florida matchup, but that’s one nice thing about returning 17 starters from 2021.

Utah’s defense gets a lot of well-deserved hype, but their offense is nothing to slouch about. QB Cameron Rising is back after throwing for 2,493 yards with 20 TD and 5 INT last season and he’s versatile, breaking off a 40+ yard run in the Pac-12 Championship game and a 60 yarder in the Rose Bowl. Rising was a 1st team All Pac-12 selection as was returning RB Tavion Thomas who had 1,108 rushing yards with 21 TDs.

Can Napier Get the Most Out of Richardson?

The hype is real this year for Florida QB Anthony Richardson, an early season Heisman candidate and a projected first round pick in the NFL next year. Richardson has great size (6’4, 240 pounds) and runs a 4.4 40-yard dash but he also had just 6TD to 5 INT passing last year while adding another 401 yards and 3 TD on the ground in limited appearances. Basically Richardson has potential, but is also unproven.

New coach Napier will try to unlock Richardson’s potential. The Gators signed the former Louisiana head coach this offseason after he went 40-12 over four seasons with the Ragin Cajuns. Napier brought a weapon with him to Gainesville in RB Montrell Johnson (891 yards, 12 TDs), and even though the Gators lost all three of their top rushers from 2021 they have one of the deepest backfields in the SEC.

Napier also was able to convince offensive lineman O’Cyrus Torrence to come with him to The Swamp, joining three returning starters on the Gators line. Florida was a top 25 rushing team last year as it was, and if that experienced line can wear on Utah – especially on a hot night in Gainesville- the Utah vs Florida matchup could get interesting late in the game when the best conditioned team has the edge.

There are supposed to be a lot of Utah fans in attendance in what they call a “bucket list stadium” game at the Swamp. That being said the hype is real for Florida this year too with a new coach and an electric QB. The Utes simply have too much experience, too good of a defense, and a couple of big offensive weapons set for even bigger things in 2022.