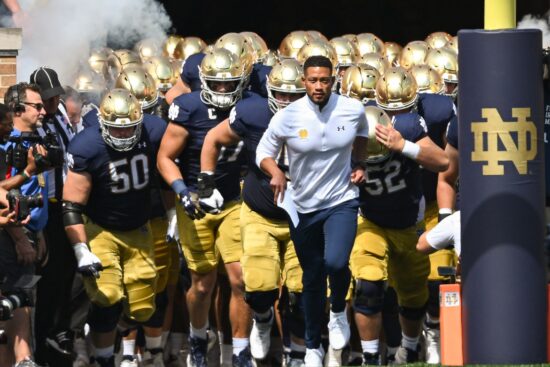 It’s been a tale of two weeks for the Notre Dame Fighting Irish (0-2) so far in 2022. ND lost their opener 21-10 at Ohio State but most people considered that a solid showing on the road in Columbus, as +17 point underdogs, and in Marcus Freeman’s head coaching debut. What happened last week in a 26-21 loss to Marshall in South Bend as -20 point favorites is what has Notre Dame fans already pushing the panic button.

The California Golden Bears have started off 2-0, but both wins were at home and as at least -13 point favorites. Now Cal makes the cross-country trek and they’re either going to get a real angry Notre Dame team or a real vulnerable one. The Vegas odds are still backing the Irish as -11.5 favorites in the California Notre Dame preview.

Even though he transferred some 2,000+ miles away, Cal QB Jack Plummer can’t get away from the Indiana rivalry with Purdue. Plummer was the QB for Purdue last season going 25/36 for 187 yards and a TD in the Boilermakers 27-13 loss to ND in South Bend. Purdue gave the QB job to Aidan O’Connell (who has been great) so Plummer was off to Berkeley in the offseason.

Plummer has had a solid start in his new digs, going 23/35 for 268 yards with 3TD/1INT in the opening 34-13 win over UC-Davis and followed that up going 28/39 for 278 with 1/1 against UNLV. Obviously the quality of competition jumps up a bit for the Bears in this week’s California Notre Dame preview, and it’s also the first time going on the road this season for Plummer and Co.

It remains to be seen if the Cal defense gets a break with Notre Dame losing starting QB Tyler Buchner for the season because he was completing just 56% of his passes with 0 TDs and 2 INT. Backup Drew Pyne is in his third year with Notre Dame but just as inexperienced as Buchner.

SEE ALSO: Nebraska has a new coach as they welcome #6 Oklahoma to Lincoln

Irish Can’t Lose Another One

Notre Dame knew there were going to be some growing pains after Brian Kelly left for LSU and a 10-year $95 million contract after leading the Irish to an 11-2 record last season and a CFP berth the year before that. Most people were fine with Marcus Freeman being promoted from defensive coordinator to HC, but home losses like the one last week to Marshall are unacceptable in South Bend.

Freeman is feeling the pressure just two games into his head coaching tenure and this team has to deliver a win in the California Notre Dame preview. They’ll have to do it with a backup QB in Pyne who has 39 career pass attempts. The good news is that despite the 2-0 start, the Cal defense could have some issues after giving up 145 yards rushing to UC-Davis and a decent 300+ total yards to UNLV last week.

If defense is supposed to be Freeman’s forte, the Fighting Irish should have some real concerns after allowing 219 yards rushing to Marshall last week. Ohio State also had 172 yards on the ground in week one so that’s an area the Golden Bears could exploit with Jaydyn Ott averaging 6.5 ypc through two games.

It seems like this game plays out one of two ways. Either Notre Dame rolls to a decisive 20+ point win as they are angry and exploit a Cal team traveling cross country in their first road game of the season – or the Irish are in complete disarray and lose a third straight. The Irish have shown nothing that would suggest the former is going to happen so take the points.