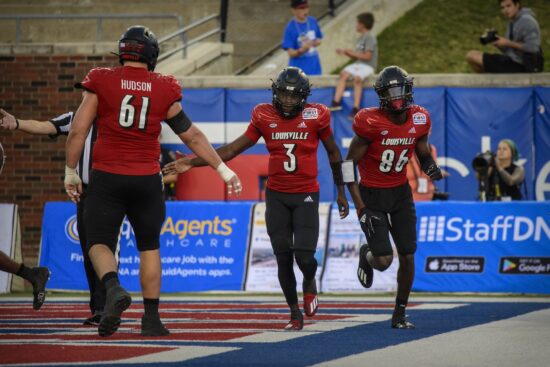 The Louisville Cardinals are in big need of a bounce back after their disappointing 31-7 loss at Syracuse on Saturday night as -5.5 favorites. UL couldn’t get anything going on offense and were bowled over on defense which isn’t great on the short turnaround to visit Gus Malzahn’s UCF Knights on Friday.

Central Florida didn’t play the quality of competition that Louisville did in week one, but they were able to build momentum with a 56-10 win over South Carolina State to cover the lofty -43.5 Vegas odds. Despite their week one win coming against an FCS squad, oddsmakers like what they saw from the Knights making them a -5.5 favorite in the Louisville vs UCF matchup.

Cunningham Needs a Bounce Back

They say you can’t win a Heisman Trophy in September – but can you lose it? Louisville QB Malik Cunningham was a preseason favorite to be named the best player in college football following a 2,941 yard / 19 TD passing performance to go along with 1,031 yards rushing and another 20 TDs in 2021. The Cardinals QB was a non-factor in week one though with just 152 yards passing with 2 INTs while also being held to 34 yards on the ground on 13 carries.

There’s a really good chance Cunningham bounces back in Friday night’s Louisville vs UCF matchup, but he also had 5TDs vs. Syracuse last year before being shut down by the Orange this season. There’s also the issue of the short turnaround and Louisville traveling for a second straight week working against the Cardinals.

Even if Cunningham is better in week two, the Cardinals still have to shore up their defense after allowing 237 yards and 2 TDs passing to Syracuse’s Garret Shrader last weekend. Shrader is known as more of a running QB who had just 1,445 yards through the air last season, so the fact he was able to post a 72% completion rate and a 177.7 rating in week one has to give UCF confidence moving forward.

UCF With a Nice Opener

It’s unknown if closing out the previous year on a high note has any carryover effect, but UCF won six of their last seven in 2021 including a 29-17 victory over Florida as +7 point underdogs in the Gasparilla Bowl. The Knights sure seem to have momentum coming into Malzahn’s second year with the team following their 46-point win over South Carolina State in the season opener.

Much like Syracuse last week, UCF has a non-conventional QB as well. John Rhys Plumlee was a backup QB at Ole Miss his freshman year, played kind of a hybrid his sophomore year, and then was a full-time WR for the Rebels last season. Plumlee transferred to UCF to be QB1 in the offseason and has started off with 308 yards and 4 TDs through the air to go along with 86 yards rushing and a TD on the ground. Plumlee is just a great athlete who was also a starting center fielder for the Ole Miss baseball team.

The thing about Plumlee and UCF’s performance in week one as a whole is that you have to take their opponent into account. That being said Isaiah Bowser looked good on the ground with 83 yards and 2 TDs while the Knights defense held the Bulldogs to a mere 91 yards of total offense.

Besides being at home for the second straight week while Louisville travels for a second consecutive game, UCF has another advantage in their season opener being last Thursday. That’s a full week of rest while the Cardinals have to turn around from a Saturday night game at the Carrier Dome to this Friday night tilt in Florida.

The intangibles are just too much for Louisville to overcome this week, especially with Cunningham looking human last week against a Syracuse team he dominated in 2021. The Knights get the lean here.