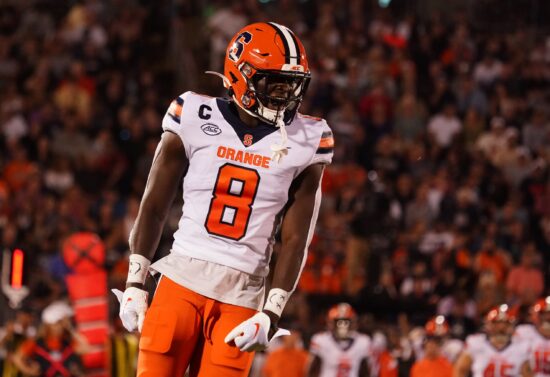 Two teams with the potential to really air out the football meet up in the Dome on Saturday afternoon. The Purdue vs Syracuse prediction features the 2-0 Orange coming off a 48-14 win at UConn while the Boilermakers take their first road trip of the season.

Orange QB Garret Shrader is off to a blazing start in 2022, throwing 5TDs and running for 2 more. Purdue QB Aiden O’Connell threw for 356 yards against a solid Penn State secondary in the opener so this matchup has the real potential to be a back and forth ping pong game. The Vegas odds have the Orange as -1.5 road favorites with a 59.5 O/U.

Purdue Just Missed Out on 2-0

The Boilermakers would love to be undefeated coming into the Purdue vs Syracuse prediction, but Penn State got a TD pass with 0:57 left in week one to steal the 35-31 victory in West LaFayette. Purdue was able to bounce back in a big way last week against an inferior opponent in Indiana State.

Boilermaker QB Aidan O’Connell had 356 yards passing vs. a good Penn State secondary in week one, and he followed that up with 4 TD passes on 19 throws last week vs. Indiana State. Once O’Connell got the full-time job last season he thrived in completing 71.6% of his passes for 3,712 yards with 28 TDs to 11 INTs. O’Connell has a full grasp of this offense in his sixth college season.

Even though the Syracuse defense has put up some solid numbers through the first two games of the season, Purdue’s offense should be just fine on Saturday. The same cannot be said for the Boilermakers defense, which gave up a five total TD day to Penn State QB Sean Clifford in the season opener. Indiana State managed just 145 total yards of offense last week, but did have two drives deep into Purdue territory despite being heavily outmatched.

Syracuse Defense Has a Challenge

The Orange have started their season 2-0 after wins over Louisville and Central Florida. The opener against the Cardinals was a huge win for Syracuse who lost 41-3 to Louisville last season. In the 2021 meeting Cardinals QB Malik Cunningham had 4 TD passes and another one on the ground, but he was held to 152 yards passing with 2 INT in week one and was kept out of the end zone.

The Syracuse defense looked good last week as well, holding Connecticut to 14 points and just barely over 200 yards of offense. Purdue is averaging 43.5 ppg through two games this season and present a huge test through the air. O’Connell and transfer WR Charlie Jones have already hooked up 21 times for 286 yards and 4 TDs this season.

Syracuse was supposed to lose in their opener as +5.5 underdogs against Louisville, and they opened as +1.5 underdogs for Saturday’s tilt but have been bet down to -1.5. In a game featuring two highly efficient QBs on the top of their game it’s best to just sit back and watch two glorious offenses go to work.