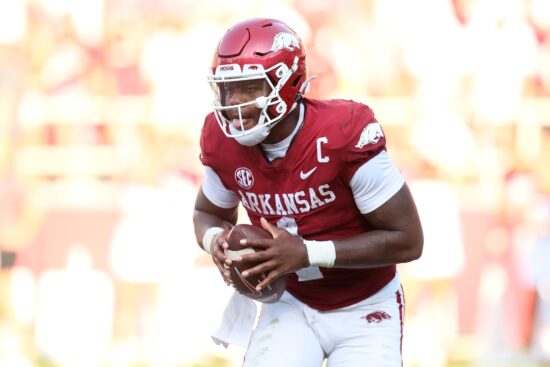 It wasn’t the easiest draw to start the season, but the Arkansas Razorbacks dispersed Cincinnati 31-24 last weekend to barely cover the -6.5 Vegas odds spread. The Bearcats are 22-2 the last two seasons and made the CFP in 2021 so the Hogs have to be riding high following that win.

The South Carolina Gamecocks hope they can catch Arkansas in a letdown spot after their big win last weekend, with SC coming off a 35-14 victory over Georgia State in their own opener. The Hogs are -8.5 favorites in the South Carolina vs Arkansas matchup with the game being at Donald W. Reynolds Razorback Stadium looking like a huge advantage for the home team. 74,000+ fans made life miserable for Cincinnati last week in Fayetteville.

South Carolina Should Be Better in Week Two

Georgia State is no pushover but at the same time South Carolina needed a lot of breaks to get the week one win and cover the -12 point Vegas odds. The Gamecocks blocked two punts and returned them for TDs, hit a couple 50+ yard field goals, and even converted on a fake field goal that led to a first half TD.

Make no mistake, the Gamecocks excellent special teams play last weekend was no accident as their coach is Shane Beamer the son of legendary Virginia Tech coach Frank Beamer who was a special teams guru. Beamer was the outside linebackers coach and special teams coordinator when #23 South Carolina visited Arkansas in 2007 and got rolled over to the tune of 542 yards rushing by the Razorbacks RB trio of Darren McFadden, Felix Jones, and Peyton Hillis.

While special teams is a big focus for the Gamecocks, the truth is their offense is going to have to be better to pick up a win in the South Carolina vs Arkansas matchup. Spencer Rattler is the new SC quarterback after transferring from Oklahoma and he threw 2 INTs while going 23/37 for 227 yards and a TD in the opener. The Razorbacks defense did give up 325 yards passing to Cincinnati QB Ben Bryant last week so maybe Rattler is better in his second game with the Gamecocks.

Jefferson Continues to Be the Man

Jefferson’s 4 TD performance in the season opener came against a Cincinnati team that was 5th in scoring defense last season giving up just 16.1 ppg. Even with the big win last week South Carolina still allowed 200 yards rushing to Georgia State so the combo of Jefferson and Raheim Sanders (20 carries, 117 yards last week) should have a huge day on the ground.

Cincinnati took a huge loss this offseason with the graduation of 4-year starting QB Desmond Ridder, but Arkansas still held them to 24 points last week after the Bearcats averaged 39.2 in 2021. Now the Hogs get a South Carolina team that ran for just 79 yards on 32 carries against Georgia State so this game really comes down to whether Rattler can beat the Arkansas secondary or not.

If you trust Rattler to be better in his second game with the Gamecocks then taking the +8.5 points is the way to go. Arkansas seems like the more consistent play though – they should be able to run the ball at will and Jefferson was dynamic against a much better Cincinnati defense last week.