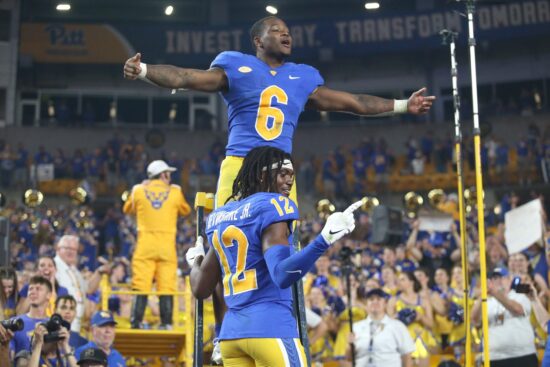 The Pittsburgh Panthers will try to avoid a letdown as they enter into their week two matchup with the Tennessee Volunteers. This is the first time Pittsburgh is hosting an SEC team, but hopefully the 9-days off will help the team exhale after a dramatic 38-31 win over West Virginia in the “Backyard Brawl” last Thursday.

Like the #17 ranked Panthers, Tennessee has high hopes for the 2022 season and they are off to a great start following a 59-10 win over Ball State last Thursday which covered the -37 point Vegas odds. It’s a sign of the expectations for the Vols this year that they are -6.5 favorites in the Tennessee vs Pitt matchup on Saturday afternoon.

What Did We Learn From Tennessee?

Pittsburgh had a much tougher matchup than the Volunteers did in their season opener as Tennessee ran through Ball State 59-10. It’s hard to tell if you gain much from that win because of the quality of competition, or if that’s the perfect game to kick off the season with prior to the challenging trip to Pittsburgh?

Regardless of whether the Vols’ overmatched Ball State last week, coach Josh Heupel has to like what he saw on both sides of the ball last Thursday. Hendon Hooker completed 72% of his passes (18-25) to kick off his redshirt senior season with 2 TDs and 0 INT. He had 2,945 yards last year with 31TDs to just 3 INT so Hooker is a smart, experienced player that doesn’t make mistakes.

10 different receivers caught a pass for Tennessee in week one led by Cedric Tillman having six grabs for 68 yards. The Vols racked up 351 yards through the air and another 218 on the ground and their 569 ypg is 14th in the country through one game. The Pitt defense was #6 vs. the rush last season but gave up 190 to the Mountaineers last weekend so that’s an area the Vols can exploit.

Can Slovis Be Even Better in Game Two?

It may have taken a Marlin Devonshire 56-yard INT return with 2:58 left to seal the win last week but that’s still a satisfying 38-31 victory over West Virginia in the first Backyard Brawl matchup since 2011. That snapped a 3-game losing streak in the series for the Panthers and it marked a big victory as they are moving on from the Kenny Pickett era (20th pick in NFL draft) after he threw for 42 TDs against 7 INT last season.

Another reason last week’s win was so big was because it was a matchup of former USC quarterbacks with Pitt’s Kedon Slovis getting the best of J.T. Daniels who he replaced with the Trojans in 2019. Slovis is in the system that Pickett excelled in last season (although with a new offensive coordinator) and he looked comfortable in his team debut going 16/24 for 308 yards.

While the Panthers offense should be just fine in the Tennessee vs Pitt matchup there is some concern with the defense after one game. West Virginia’s C.J. Donaldson had 125 yards on just 7 carries last week while Tony Mathis, Jr. added 71 yards on 16 carries. Daniels was 23/40 with 2 TD and 1 INT in his first game in the WVU system.

Bettors are split nearly 50/50 on this matchup in what the Vegas oddsmakers are predicting to be a high scoring Tennessee vs Pitts game with an O/U of 66.5. The Panthers have great value playing their second straight game at home and Slovis seems like he could be the real deal at QB. The Panthers defense should be better in week two which is the X-factor in this game that seems like it has the wrong team favored.