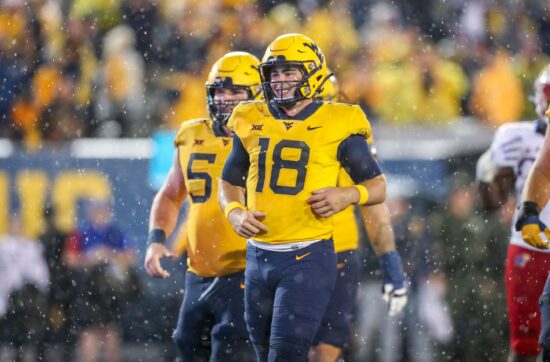 Vegas oddsmakers are calling Thursday night’s West Virginia vs Virginia Tech matchup a close one with WVU a -2.5 favorite on the road. Virginia Tech is playing their third straight home game although the trip from Morgantown to Blacksburg isn’t exactly a jaunt at just a 4-hour drive.

WVU has had more challenges this season than the Hokies, losing a late one 38-31 against #24 Pitt and then falling in OT against undefeated Kansas. The Mountaineers finally got a break last week in a 65-7 domination of Kansas, at the same time that Virginia Tech was struggling to a 27-7 victory over Wofford but as -38 point favorites.

Even though their biggest offseason transfer was former Georgia and USC quarterback JT Daniels, West Virginia might have bona fide stars in the making in RB CJ Donaldson and Tony Mathis, Jr. 3 of Donaldson’s 9 carries last week went for TDs (including an 82-yard scamper) while Mathis, Jr. added two scoring runs (along with 104 yards on 17 carries).

Some of West Virginia’s success on the ground last week came from playing against Towson as a -41 point favorite. At the same time some of Virginia Tech’s stellar numbers against the run (40.7 ypg, 3rd best in the country) may be from playing Old Dominion, Boston College, and Wofford to start the year.

While the running game is getting a lot of attention early, Daniels has done a solid job of leading the offense which including scoring on all 10 drives last week against Towson (9TDs, 1 FG). Daniels gets his second primetime game after losing jobs at USC and Georgia in the past, but his pass that was returned 56-yards for a TD by Pittsburgh’s Marln Devonshire in the opener wasn’t a great start to his career at WVU.

It’s early, but Donaldson looks like he’s the real deal in the backfield for West Virginia and Mathis, Jr. gives the Mountaineers a nice dual threat at RB. That combo provides a great opportunity for the Hokies rush defense to prove they are legit. Even in the week one 20-17 upset loss to Old Dominion VT allowed just 80 yards rushing to the Monarchs on 33 carries and in week two Boston College couldn’t get anything going on the ground with 26 carries for a mere 4 yards.

While Virginia Tech’s defense may indeed be for real, their offense has left a lot to be desired through three games. VT put up nice numbers last week with 475 total yards against Wofford, but they scored just 27 points even as -38 point favorites. The Hokies rank 92 in the country in total yards (367.7), 86th in passing (226.3), 88th in rushing (141.3) and their 23.7 ppg is just 102nd in the FBS. Those poor numbers have come despite the 92nd ranked strength of schedule in the nation.

Say what you want about West Virginia’s 1-2 start to the season but at least they’ve had some quality competition in Pittsburgh and Kansas. Virginia Tech couldn’t assert their dominance even as nearly 40-point favorites over Wofford last week. Home field on a Thursday night will give VT an edge, but West Virginia is just the better team.