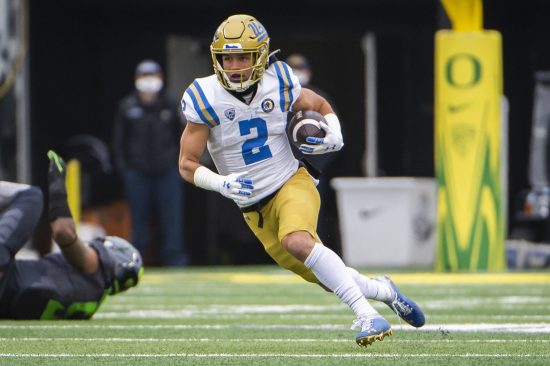 Battle of the bad defenses.

Both Arizona and UCLA have given up at least 34 points in their first two contests. Presumably Arizona would have given up more if they had actually played their opening game, but regardless they are almost giving up 500 yards of offense a game and UCLA is almost letting up 400 a game. So the question remains, who will win in this shootout battle of below .500 Pac-12 teams?

I’m going to go with UCLA winning this shootout. After losing a tough game to Colorado to open up the season, they rebounded with a blowout win versus Cal and played #11 Oregon as close as any team could losing just by three points on the road. The majority of these games were actually shootouts as well for UCLA with over 80 points combined in the Colorado game and over 60 in the Oregon game just last week.

Helping putting up these numbers has been Junior Quarterback Dorian-Thompson Robinson. Through three games this dual threat QB has seven touchdowns though the air and two on the ground. However he did not play last game against Oregon and is listed as questionable for Saturday due to an undisclosed injury. However this should not deter you from sticking with UCLA as they proved they could still rely on their rushing game to keep things close with Senior Demetric Felton rushing for over 160 yards and two touchdowns.

As I stated in the start of this article the Arizona Wildcats have had trouble stopping anything on defense like UCLA yet they are winless. This doesn’t mean they haven’t been in games; they would have won their first game of the year against a top 25 opponent in USC but gave up a touchdown run with just 25 seconds left in the game.

Despite this, Quarterback Grant Gunell has been trying his best, tossing 6 TDs in just two games and already over 500 yards through the air. However there might be too much of a good thing going on with the Wildcats offense through the air as their leading rusher Gary Brightwell has yet to score a touchdown on over 30 carries. This makes it easy for defenses to gameplan around, putting all the pressure on Gunnell to make something happen.

If it isn’t clear by now, both these defenses have been very subpar so far so I would lean on the over which is sitting at 69 points. However if you would like to go moneyline on this the Bruins are the pick as they have shown they can actually stop opponents when they need it most, and actually compete in shootout games with just both their losses coming by a combined nine points. Look for them to make a few stops early on in the game to take a slight lead and hold on until the end.