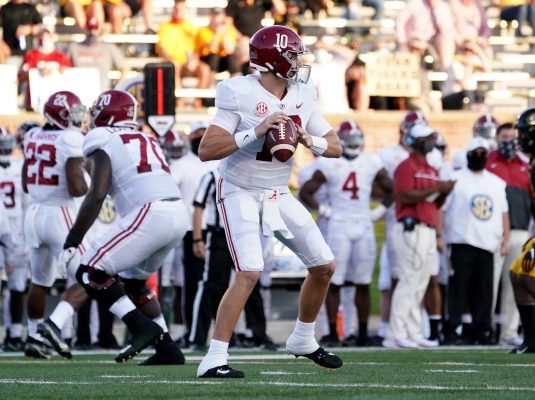 The Crimson Tide enter the Iron Bowl looking to secure a spot in the SEC championship.

Alabama (7-0) plays Auburn (5-2) in the 79th edition of the Iron Bowl. The Crimson Tide enter the matchup undefeated, with a playoff appearance on their minds. The Tigers will look to pull a second consecutive upset as they hope to ruin Alabama’s season.

The Crimson Tide possess one of the SEC’s top offenses, averaging 548.6 yards a game. Quarterback Mac Jones is the conference’s second leading passer, while his favorite target Devonte Smith is the league’s second leading receiver.

Alabama has three of the top pass catchers in the SEC in Smith, Jaylen Waddle, and John Metchie III. All three rank among the league’s top 10 players in receiving yards. They’ll look to stretch the field against an Auburn secondary that ranks second in the conference in pass defense.

Auburn is going to have to keep this game low-scoring if they want to pull the upset. The defense only allows 22 points a game, good for third in the SEC. The Tigers need to use a productive pass rush to make Mac Jones uncomfortable in the pocket. They’ve recorded 16 sacks on the year.

On offense, Auburn needs to control the clock with a run game that’s averaging 170.4 yards a game. Bo Nix and running back Tank Bigsby are stalwarts in the backfield, and should be able to find some running room versus the Tide.

Nix will also rely on receiver Seth Williams to help out in the pass game. Williams leads the team with 563 yards and 33 catches.

Alabama is favored by 24.5 points. The Crimson Tide have won six of the last ten, with three of those victories coming by 28 points or more.

Auburn pulled the upset last season, but may not have the firepower to keep pace with the Tide. We’re taking Alabama.

The total for the matchup is set at 62.5 points. Alabama has hit the 40-point mark in five of the last ten games against the Tigers. The total has also hit 63 points in each of the last two meetings. Alabama will score, the game will ride on the Tigers ability to keep up. We think they’ll score just enough to hit the over.