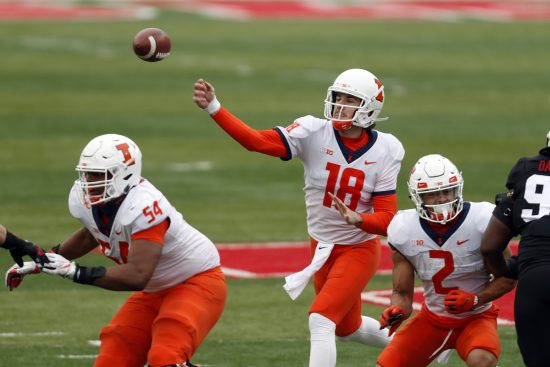 Ohio State is coming off a very close game against an Indiana team that is surprising everyone this year. The Buckeyes were up 35-7 at one point in this game but ended up winning just by a touchdown 42-35. Now that their biggest threat to their Big Ten East title hopes has been dismantled, the Buckeyes can win out and presumably play Northwestern in the title game. The road to that journey start Saturday at Illinois.

The Fighting Illini have traditionally been the bottom tier of Big Ten football especially in the last few seasons. However this season after starting 0-3 with two blowout losses and a close loss to Purdue, the Illini have strung together two back to back road wins thanks to their QB play.

The Illini have used three different quarterbacks this season with the latest being Senior Brandon Peters who threw for 205 yards and a touchdown last game at Nebraska. Peters has missed a month due to the coronavirus but immediately got the start at Nebraska when he was cleared. Also in the QB room is dual threat Isaiah Williams who was responsible for the Illini’s first win of the season, winning at Rutgers by rushing for over 190 yards and a score. And according to Peters, Offensive Coordinator Rod Smith plans to play potentially both guys Saturday, “leading up to the game, he’s like, ‘You’ve both earned the right to play,'” Peters said. “Coach Rod told both of us, ‘I’m not going to take anybody out of their rhythm. Brandon, you’ll start, but we’ll go in a different direction if we need to.”

… But It Won’t Be Nearly Enough

While a two quarterback system could shake things up for Illinois, the talent level is just still not there for them against an opponent like the Buckeyes. Ohio State has put up at least 38 points a game while Illinois averages less than 22. Aka Ohio State will put up points early and there is not enough offense on the other side to catch up to them in this matchup.

Leading this offense of course is Justin Fields. He had a very off game last week against Indiana, throwing two first half interceptions, but still led his team to 45 points and a win. With this being said, I think Indiana was a very well-coached defense as Fields was under pressure all game. This won’t be the case against Illinois as they give up nearly 300 yards through the air and 400 total yards of offense.

The issue won’t be Ohio State winning, the issue will be covering in my opinion. The Illini offense has not put up a lot of points all year yet they showed they can at least limit teams to a little over 40 as their final score. This means Ohio State will have to limit this offense coming off a win with over 40 points on the board, to less than two touchdowns if this Illinois loss will look anything like the others. Best bet in this game is the under 71.5 points.