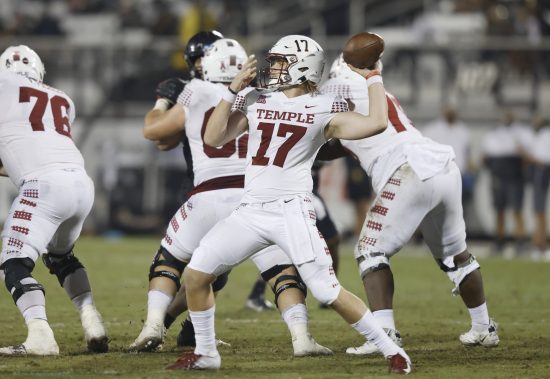 The finish line is in sight for the 8-0 Cincinnati Bearcats, with just the Temple Owls and Tulsa Golden Hurricane standing in the way of a 10-0 finish to the regular season. The Owls should be nothing but a minor speed bump this week, as oddsmakers have Cincinnati as -36 point favorites. The Bearcats need to be weary of looking ahead to the visit to #24 Tulsa next weekend however.

Luke Fickell’s team is breathing a sigh of relief after outlasting Central Florida and the #1 passing attack in the nation 36-33 last week. UCF was on pace to get close to the 1989 Houston Cougars in terms of yards/game, but Cincinnati’s defense ended those prospects in holding the Knights to 116 yards on the ground and 243 through the air.

Strong defensive play is nothing new for a Bearcats unit that has ascended to 11th in the country in yards allowed per game. Cincinnati’s 15.0 points per game allowed is also the 6th best mark in the FBS. It’s really looking like Temple even getting on the scoreboard will be a moral victory in Saturday afternoon’s matchup as the Owls have been held to 13 points or less in 3 of their last 4 games.

Simply put, Temple has no chance in this one. Not only will the Owls not be able to score, it’s hard to see them stopping Desmond Ridder and the high-octane Bearcats offense. Ridder is on another level right now, throwing for 338 yards and 2 TDs vs. UCF while running for another 57 yards and 2 TDs. Ridder has 16 TDs to 6 INT on the season, and has scampered for another 11 rushing TDs.

Can Temple Somehow Keep This Close

While betting on an Owls outright win would provide a nice windfall heading into the Holiday season, there’s very little possibility that 1-6 Temple pulls off that upset. Covering the 36 points is a different story in a conference game however, especially with the Bearcats trying to stay rested and healthy for their showdown with Tulsa next weekend.

Temple has kept 5 of their 6 losses within 24 points this year, the lone blowout being a 38-3 thumping at the hands of the Tulane Green Wave. That margin of victory still didn’t cover Saturday’s spread of 36 however. On the bright side Temple has not only kept things close in their series with Cincinnati, they’ve actually won 4 of the last 5 meetings. The Bearcats were victorious last season, but by the score of just 15-13 in Cincinnati.

On paper, there’s not a ton to love about Temple as they have the 3rd worst offense in the AAC and also allow the 2nd most points. The Owls seem to be ready for this strange season to be over with as well, losing 28-3 last week to 2-6 East Carolina, gaining just 235 yards against the 2nd worst defense in the American Conference.

The only question in this game is when the Bearcats pull their foot off the gas? Prior to the close UCF game Cincinnati had posted wins of 39 points over Memphis, 28 vs. Houston, and 39 against East Carolina so they can run it up a bit. Blowing out Temple doesn’t impress anybody at this point in the season though, and Cincinnati should be focused on staying healthy for the chance to go 10-0 at Tulsa next weekend.