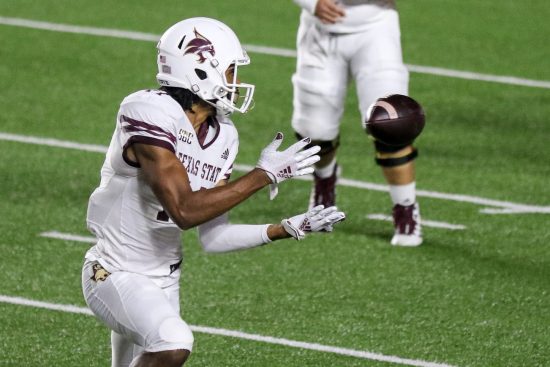 Coastal Carolina will try to keep its dream season alive when they travel to Texas to take on the Bobcats.

Coastal Carolina (8-0) has impressed this season, currently sitting undefeated and atop the Sun Belt conference standings. Texas State (2-9), on the other hand, has struggled, but they are coming off of their second win of the season.

Who will win this conference matchup?

Coastal Carolina took down Appalachian State last weekend, almost locking the Chanticleers into the Sun Belt championship game. With a win over Texas State, they can clinch the division.

The Chanticleers are led by freshman quarterback Grayson McCall and a high-flying offensive attack. The unit is averaging 432.9 yards a contest, and they rank first in the Sun Belt in scoring at 37.4 points.

McCall, in just his first season under center, is third in the league in passing, and has thrown a conference-high 18 touchdown passes this year. His favorite target this season has been receiver Jaivon Heiligh, who’s posting 80.9 yards a game.

On defense, the Chanticleers rank first in the Sun Belt in scoring and second in yards allowed. They’ve also been very opportunistic, leading the conference in interceptions.

Texas State has struggled much of the year, losing nine of their first ten games. The offense has been productive (28.9 pt/gm), but the defense has been bad (37.2 pt/gm). The Bobcats have managed to total 34 points or more in three of their last four matchups, but have only managed a 1-3 record in that time.

The defense has been flat out bad, but the Bobcats have also run into a bit of bad luck. Six of their nine losses have been by 10 points or less, with four having come down to just one score. The offense has kept Texas State in nearly every game thus far, and it will hope for a similar output when facing the league’s top ranked defense.

As mentioned, Texas State is just 2-9, but they’ve been close in the majority of those contests. They’re also coming off of a win over Arkansas State, and could have some momentum as Coastal Carolina comes to town.

The Chanticleers, though, are looking to book their ticket to the Sun Belt championship. Expect another business-like approach as they continue their dream season.