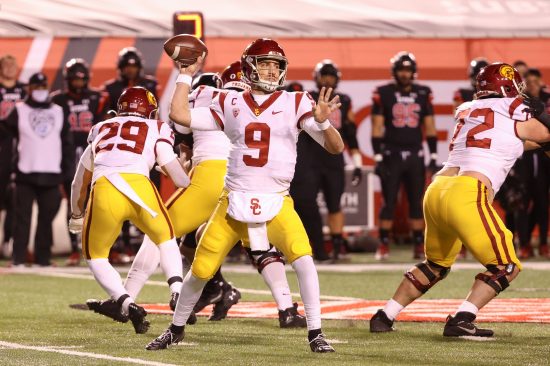 The Colorado Buffaloes travel this Saturday to Los Angeles to face the #19 ranked USC Trojans at the Coliseum for a game with significant Pac-12 South Division implications.

During a college football season plagued by cancellations, the Pac-12 Conference has not been an exception to this trend. As for now, USC (3-0) and Colorado (2-0), remain the last undefeated teams in the Pac-12 South Division with three games each left to play, pending rescheduling of previously cancelled games.

A win for either team Saturday in Los Angeles would garner a crucial head-to-head tiebreaker advantage in the South Division as well as much needed momentum heading into the final games of the season.

Sam Noyer has completed nearly 64% of his passing attempts with only one turnover, including 100 yards rushing on 21 attempts, showing Noyer’s ability to extend plays with his feet.

Jarek Broussard has 308 yards rushing over two games totaling an impressive 154 yards per game. Colorado will need Noyer’s creativity and athleticism combined with Broussard’s consistency in the run game to control time of possession and keep the Trojan’s high-powered offense off the field. On the defensive side of the ball, the Buffaloes have held opposing QBs to just over 50% completion percentage, a feat if accomplished Saturday would bold very well towards a Colorado upset victory.

Despite an undefeated 3-0 record, #19 USC has not shown the consistency needed to compete with the nation’s best. However, a convincing win over Colorado on Saturday would be a massive step in completing USC’s first and foremost goal of winning the Pac-12 South Division. Captained by QB Kedon Slovis (94-133, 970 yards 5 TDs), the Trojans feature a type of Air-Raid offense dictated by coordinator Graham Harrell.

Harrell aims to spread the ball around to USC’s playmakers Tyler Vaughns, Amon-Ra St. Brown, and Drake London, while keeping the defense honest with runs out of the shotgun formation. Conducting the running-pass-option offense (RPO) has been a struggle for USC this season with quarterback Kedon Slovis not providing the defense with a running threat. This has led to predictable offensive play calling.

Colorado +13.5. Take the Buffaloes plus the points to cover against USC on Saturday. USC has struggled immensely this year against quarterbacks with an ability to tuck the ball and run. The Trojans defense gave up 111 rushing yards to ASU QB Jayden Daniels, and 30 yards rushing per game to quarterbacks against Arizona and Utah, both teams with pocket passer quarterbacks. Sam Noyer and Jarek Broussard should have no problem putting up points to compete against the Trojans on Saturday.

While I am not predicting an upset victory, this has the makings of a close game with the Pac-12 South Division championship potentially on the line.