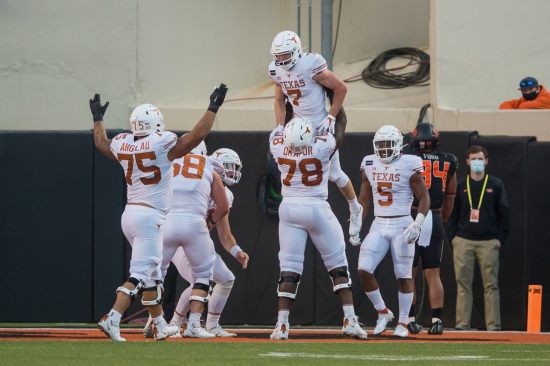 The Longhorns welcome the Cyclones in a matchup of Big XII powers.

Iowa State (6-2) sits atop the Big XII standings having won six of seven conference matchups. The Cyclones have won three straight since a three-point loss to Oklahoma State on October 24th. Texas (5-2), meanwhile, has is looking up at Iowa State, sitting at 4-2 in conference action. They, too, have won three in a row, and are coming off of a 17-13 win over West Virginia.

A Texas win would shake up the Big XII standings. Who will grab an edge in the championship race?

Iowa State has been on a roll since dropping a 24-21 matchup to No. 6 Oklahoma State in late October. In the three games following that defeat, the Cyclones have outscored opponents by a total of 135 to 53. That includes a 45-0 shellacking of Kansas State last weekend.

In the three-game win streak, Iowa State is averaging 45 points a contest, albeit against three of the conference’s worst defenses.

Still, the Cyclones have fielded the league’s third best offensive unit in 2020 (437.6 yd/gm). Quarterback Brock Purdy has thrown for 1,713 yards and 13 scores, while the run game has been the Big XII’s best at 205 yards a game. Running back Breece Hall leads the conference in rushing. He’s eclipsed the 100-yard mark in every game this season, but he’ll be tested by Texas’s fourth ranked run defense.

On defense, Iowa State has been productive, allowing just 333.8 yards and 23.4 points an outing. They’ll have their hands full with the Longhorns high-scoring attack.

Iowa State has been rolling on offense, but the Longhorns have been even better, scoring over 40 points a game. Quarterback Sam Ehlinger has been Mr. Do-it-all, leading the team in passing and rushing. He’s thrown for 22 touchdown passes, and run for seven more.

The Longhorns haven’t been great on the ground, and they could struggle to find running room when facing Iowa State’s second-ranked run defense, but they’ve been great in the passing attack.

On defense, Texas has been up and down. They’ve held two of their last three opponents to less than 20 points, but are also allowing over 400 yards a game. This will be the matchup to watch on Saturday.

Texas and Iowa State have met each of the last 10 seasons, with the Longhorns holding a 7-3 advantage since 2010. The Cyclones picked up a win in Ames last year to break a three-game losing streak, but they haven’t won in Austin in 10 years. That streak ends this weekend.

The total for Saturday is 57 points. It seems reasonable when looking at the two high-powered offenses, but it’s also smart to take a look at recent matchups. The last five meetings have totaled 45 or less points, with four of those games going under 35 points.

This matchup has been more of a defensive battle of late. Iowa State should be able to hold the Texas run game in check, and they can control the clock with a dominant run game of their own.