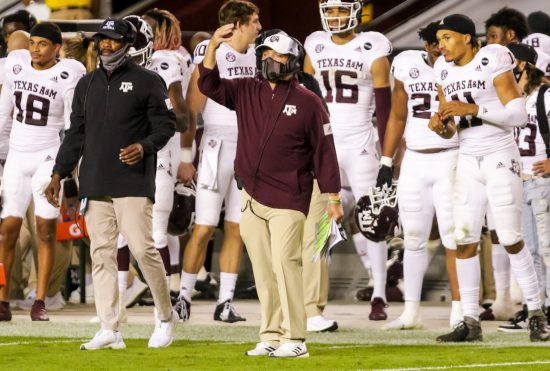 The LSU Tigers won the 2019 college football championship, but Ed Orgeron’s boys don’t seem capable of even qualifying for the Playoffs this season. Ahead of the LSU at Texas A&M game, the Tigers have a 4-3 record, having won against Arkansas last Saturday. Can they continue this trend by beating their arch-rivals the Texas A&M Aggies?

According to oddsmakers, such a scenario seems unlikely. The Aggies are coming into this game after a 3-week break caused by the cancelation of their game with Ole Miss. Their current record is 5-1, with their only loss of the season happening against the leaders of the Southeastern (West) Conference, the Alabama Crimson Tide.

The Texas A&M Aggies have won their previous four games. Three of those saw them winning by at least 11-points margin. In the previous game they played, the Aggies demolished South Carolina by 48-3.

The game in question took place on Saturday, November 7. Since then, Texas A&M players haven’t played a single game.

They were supposed to welcome Ole Miss on November 21, after a bye week. However, that game ended up postponed, giving the Aggies another week to prepare for the LSU at Texas A&M game.

They’re coming into this duel bearing the favorite tag, which is no surprise, given the fact that the Aggies have been sensational this season. If it weren’t for their defeat to the Crimson Tide, they’d have a 100% winning record.

Still, the loss to the best team in the conference was expected. This time, however, the Aggies are expected to win against their arch-rivals.

Strange Year for Ed Orgeron and the Tigers

The year started very well for the LSU Tigers, with a win in the 2020 CFP National Championship game, in which they beat Clemson by 42-15.

The game took place on January 13, 2020, but then, a long break caused by the COVID-19 pandemic started. The Tigers hadn’t played another game until late September. The new NCAAF season started badly for the Tigers, with a defeat to Mississippi State.

In October, LSU lost two more games but also won two. The only game they played in November so far was the one against Arkansas, which took place last Saturday. We saw the Tigers winning by 27-24 in a very exciting game that was decided in the final quarter with a touchdown scored by LSU’s WR Jaray Jenkins on a pass from QB Finley.

The reason behind LSU’s success last season is that they had the best quarterback college football has seen in the last couple of years. However, Joe Burrow has since moved to the NFL.

His replacement Myles Brennan wasn’t too impressive at the start of the season. Once he started improving his form, Brennan got injured. As it turns out, LSU’s first-choice QB will probably miss the rest of the season.

True freshman TJ Finley was selected as his replacement. So far, he’s been pretty decent. In the game against South Carolina, we saw his team getting 52 points, which is their offensive record of the season.

Still, to be fair, South Carolina is not as tough an opponent as Texas A&M. In fact, the Aggies defense is one of the best in the entire SEC, with 150 points conceded in six games.

The Tigers’ offense just doesn’t seem capable of scoring a lot in the LSU at Texas A&M game. At least not enough to grab themselves a win.