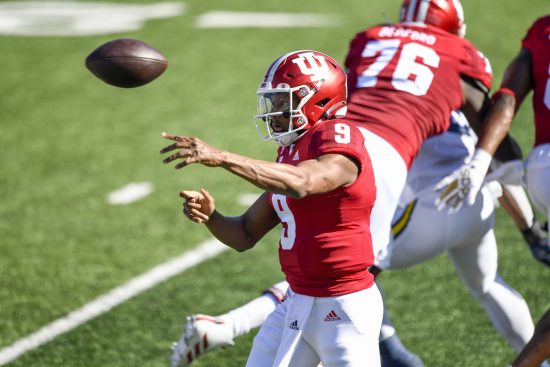 A couple of electric QBs meet up on Saturday when Taulia Tagovailoa and the Maryland Terrapins visit Michael Penix, Jr. and the Indiana Hoosiers. The Terrapins look to be in a solid spot in this one as +11.5 underdogs, as they’ll be chomping at the bit to play after being idle the last two weeks. IU takes the field after a physical contest with Ohio State last week.

Will Maryland Come Out Rusty?

When a team has a couple unexpected weeks off like Maryland just has, the old question of ‘rusty or rested’ always comes into play. The Terrapins looked great when we last saw them on November 7th, hanging a 35-19 outright win on Penn State as -27.5 road underdogs.

Taulia Tagovailoa continues his impressive ascent with 282 yards and 3 TD vs. the Nittany Lions. The sophomore has come a long way since his 94 yards passing with 3 INT debut against Northwestern, also posting a 394 yard passing, 64 yard rushing, 5 total TD performance in a win over Minnesota.

Maryland has actually risen to the #2 total offense in the Big Ten, and the Hoosiers struggled with the #1 unit Ohio State last week (as everybody does), giving up 307 yards rushing and another 300 through the air. Indiana tallied just -1 yard on the ground vs. the Buckeyes, but also threw for nearly 500. Maryland is just 9th defensively vs. the pass, but is also dead last in the Big Ten against the run.

Another Big Day for Indiana Offense?

The Hoosiers can take some positives from their first loss of the year, hanging by one score against a probable FBS playoff representative as +21 point road underdogs. The 491 yards passing from Michael Penix, Jr. were the 4th most ever posted against the Buckeyes, and WR Ty Fryfogle became the first player in Big Ten history to have consecutive 200 yard receiving games in conference play.

Despite the letdown last week, Penix and Fryfogle are going to be a tall order for Maryland to contend with as the duo somehow just keeps getting better. Fryfogle has 142, 200, and 218 yards receiving the last three games and has been the offensive player of the week in the conference for the last two weeks. Penix, Jr. is becoming a dark horse Heisman candidate with three straight 300+ yard passing games, and has thrown for 10 TD the last three weeks.

The Hoosiers defense will have their hands full with Tagovailoa, but did hold Ohio State’s Justin Fields to an 18/30 day passing for 300 yards, which is about as good as you can ask vs. the potential Heisman winner and top two pick in the NFL draft. Fields tossed two TD passes, but also had 3 INTs which were his first picks of the season.

The Terrapins are very rested, and Indiana is sure to suffer from a little bit of letdown after suffering their first loss of the season last week. Even though these are two defenses on different sides of the spectrum in the conference, Maryland should be able to keep things close, especially as Indiana looks forward to a visit to Wisconsin next week.