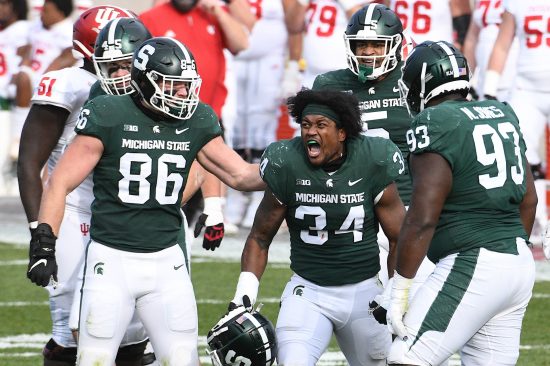 The Northwestern Wildcats continue to prove they just might be for real, coming off a very impressive 17-7 win over then #10 Wisconsin as +7 point home underdogs. Pat Fitzgerald’s team has an excellent chance to push their record to 6-0 on the season when they visit East Lansing to take on the Michigan State Spartans, a team with absolutely no offense right now.

Northwestern Has to Avoid the Letdown

It wasn’t the most electric game if you’re a fan of offense, but Northwestern continued their punishing play in limiting the Badgers to just 7 points last week. The Wildcats allowed 136 yards on the ground to UW, but on 40 carries which is manageable. Northwestern also intercepted Wisconsin QB Graham Mertz 3 times, and recovered 2 fumbles. Mertz came in with 7 TD to 0 INT, and had gone 20/21 in the opener vs. Illinois.

Defensive success is nothing new for the Wildcats squad that ranks 4th in the country in points allowed (12.6).  The Northwestern defense is not invincible, as Nebraska ran for 224 yards in week 10 – but still only managed to put 13 points on the board. Northwestern’s defense did rebound nicely though, holding Purdue to just 2 yards on the ground following the Cornhuskers’ impressive output.

All of this defensive prowess for the Wildcats isn’t very reassuring for Michigan State backers, as the Spartans have scored a combined 7 points in their last two games. That’s not saying Northwestern’s offense is very impressive either though. The Wildcats managed 80 yards rushing on 40 carries vs. Purdue and had 24 yards on 23 carries vs. Wisconsin last week – both still wins though.

Can Michigan State Win This One on Defense?

The Wildcats haven’t been able to run the ball in either of the past two weeks (104 yards on 63 carries), and Michigan State has been somewhat stout on defense ranking 7th in the Big Ten in total yards. The Spartans major problem is that the defense continually has to play uphill because of the inefficiencies of their offense.

The Spartans committed 7 turnovers in the season opening 38-27 loss to Rutgers and that sent their season on a downward spiral. Rocky Lombardi threw three more INTs vs Iowa, and Michigan State was down 35-0 by halftime. Lombardi got pulled in the last game vs. Indiana after starting 3/7 with 2 INT, and backup Payton Thorne was just 10/20 for 110 yards and another interception. The Hoosiers were also up 24-0 at the half.

It’s hard to see Michigan State’s bottom ranked offense in the Big Ten getting much going against Northwestern when the potent Wisconsin attack – who had put up 45+ points in each of their first two games – was held to one score last week. MSU is rested after being idle last week following a game with Maryland being cancelled due to COVID, but will that be enough?

The Wildcats are -13.5 favorites on the road in this one, a sign of respect for Northwestern but also an indicator of just how bad Michigan State is. Expect a very focused Northwestern squad on Saturday, as they have a nice path to the Big Ten West crown with winnable games against Minnesota and Illinois coming up.