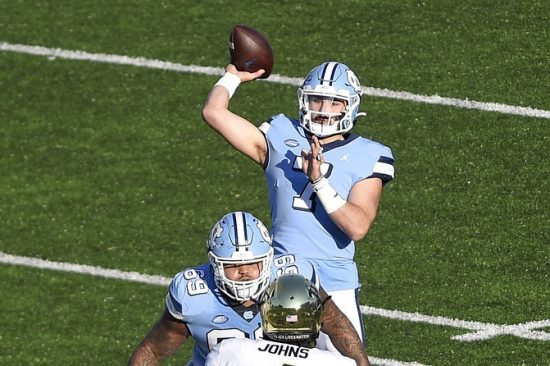 North Carolina (6-2) hosts Notre Dame (8-0) this weekend as they look to gain ground in the ACC championship race. The Fighting Irish sit atop the ACC standings after taking down conference favorite Clemson a few weeks ago.

North Carolina can shake up the standings with a win. Do they have the offensive firepower to pull the upset?

Notre Dame is undefeated and has its eyes set on the college football playoff. They’ve won with strong offense (37.6 pt/gm) and an even better defense (16.6 pt/gm).

Quarterback Ian Book has been fantastic leading the offense, and has been extremely safe with the football (11 TD, 1 INT). He’s part of a two-headed backfield that also features the ACC’s fourth-leading rusher in Kyren Williams.

While the offense has been good, the defense has been downright dominant. The Fighting Irish have the league’s best scoring defense and run defense. They have been a bit vulnerable in the secondary (243 yd/gm) which could spell trouble when facing North Carolina quarterback Sam Howell.

Howell and the Tar Heels have the top ranked total offense in the ACC (563 yd/gm). Howell leads the conference in passing yards and scores, while Dyami Brown leads the league in receiving yards.

The problems for North Carolina haven’t come on offense, but rather on the defensive side of the ball, where they allow over 30 points a game to opponents. Foes have scored 31 points or more in five of the last six games against the Tar Heels, including a 53-point output from Wake Forest last week.

Another performance like that, and the Tar Heels can likely put an upset bid aside.

North Carolina has been unpredictable for most of the season, having taken down the likes of Virginia Tech and North Carolina State, but having also lost to Florida State and Virginia. Notre Dame will be the best team they face all year.

Notre Dame has won this season with defense and clock control. They lead the league in time of possession, and the run game has been the strength of the offense. Look for the Fighting Irish to keep the ball out of the hands of Sam Howell, and keep the North Carolina offense on the sidelines.