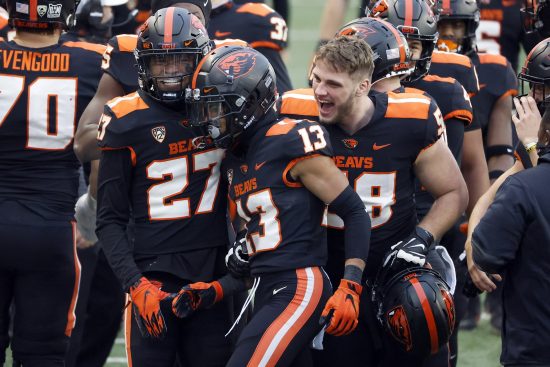 Both these colleges are used to playing each other around this time of year routinely to close out their perspective regular seasons. However in a college football season that is anything but routine, this rivalry will meet with both schools having finished just three games each respectively so far.

With starting QB Tristan Gebbia averaging a INT per game so far for the Beavers have relied on Junior Running Back Jemar Jefferson to support this offense. Jefferson is average over seven yards a carry with already five touchdowns and has been used in the passing game as well with six receptions on the year. The high rushing average has allowed the Beavers to stay in close games so far as their margin of defeat has only come by an average of 8.5 points.

However the other side of close games means your offense cannot score points. The Beavers have reached over 30 points just once so far this season while giving up the same average on defense. This might explain their record as in their two losses the offense just did not have enough fire power to come back after only going down by 10 against Washington and were held scoreless by Washington State in the first quarter which both games resulted in losses.

Offense. Offense. Offense. The Ducks have displayed numerous high-powered offenses throughout their football history and this year is no different. They are averaging 38 points a game and nearly 500 yards of offense. Quarterback Tyler Shough has thrown eight touchdowns in three games and has contributed to the rushing attack averaging over 10 attempts a game. This balanced run pass option style of offense has made it difficult for defenses to game plan around which is why despite throwing for nearly 1,000 yards in two games, the Ducks are also averaging over 200 yards on the ground as well.

As far as any weaknesses go for Oregon, it has been letting inferior opponents stay in games with them. Their last win against UCLA they were favored by 17.5 and won by just three. Their previous game before that against Washington State they did end up covering, but were trailing at halftime, needing the fourth quarter to actually pull away.

Oregon leads this rivalry series 66-47 which I predict will go to 67-47 after Saturday. Like I said, the Ducks have let inferior opponents hang with them which led to close victories, but Oregon State just doesn’t have the offense to make that happen to either to build a lead or keep up with the Ducks. Furthermore, I believe the Beavers will rely too heavily on their run game once again making it easier to game plan around defensively especially since they are averaging less than 200 yards passing.

The Ducks are looking promising in this rivalry matchup.