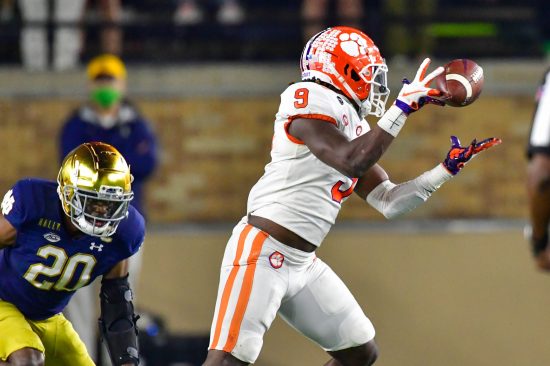 The Clemson Tigers appear ready to finally get back on the playing field after a bye week was followed by the postponement of the Florida State game. Saturday’s contest against the visiting Pitt Panthers will be the first time Dabo Swinney’s team has taken the field since a 47-40 OT loss on November 7th to Notre Dame knocked Clemson from the #1 spot in the AP Top 25.

It’s still up in the air on if it’s better or worse to face a Clemson squad that has been idle the past two weeks. If there’s ever a good time to square off with Trevor Lawrence, it’s got to be after the star QB has missed the last month of the season due to a positive COVID test. Even a rusty Lawrence is still a challenge for the Panthers defense though.

Pittsburgh is a +24 underdog on Saturday afternoon, but there are some reasons to lean towards taking the points aside from the Tigers being out of rhythm from having two weeks off. The Panthers have stepped up on both sides of the ball their last two games, scoring a 41-17 win at Florida State and beating Virginia Tech 47-14 at home.

Clemson also only beat Syracuse 47-21 despite being -47.5 favorites, was down 28-13 at the half to Boston College, and lost to Notre Dame over their last three games. In his last two outings, Pitt QB Kenny Pickett has gone 21/27 (78%) vs. Florida State and threw for 404 yards last week against Virginia Tech. That’s at least the offensive potential that can keep Saturday’s game with the Tigers close.

Clemson Ready to Gear Up For the Hoe Stretch?

After a couple hiccups with the Trevor Lawrence positive COVID test and the Florida State game postponement, Clemson hopes the distractions are behind them. The Tigers have a visit to Virginia Tech next week and a possible makeup of the Florida State game standing in their way before a potential rematch with the Irish in the ACC Championship Game which could have playoff implications.

The Tigers could’ve hoped for a lesser opponent than Pitt to try and get back in the groove and welcome Lawrence back into the lineup. 5-4 Pitt has two losses by just 1-point on the season, and also boast the #5 rush defense in the country as well as an experienced Senior quarterback.

It may sound like blasphemy, but is Clemson getting the perennial Heisman candidate Lawrence back at QB actually going to hurt their offense since he hasn’t played since a 289 yard passing performance on October 24th vs. Syracuse? Lawrence threw INTs in two games leading up to his positive COVID test, and backup D.J. Uiagalelei threw for 439 yards vs. Notre Dame the last time we saw Clemson in action.

It’s possible that Lawrence returns and all is right again with Clemson, but Pittsburgh is a physical team that isn’t going to roll over that easily. The Panthers have played solid defense the last two games, and are clicking on offense with an apparently healthy Pickett as well.