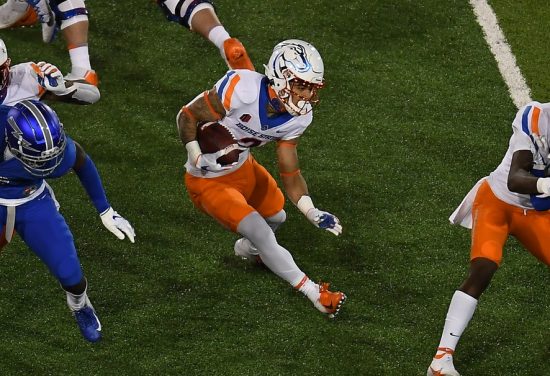 The San José State Spartans come into Boise State’s “smurf turf” territory beaming with confidence boasting an undefeated record and a one game lead over the Broncos heading into Saturday afternoon’s matchup.

The Spartans have cruised to this 4-0 start with a stifling defense which has yet to give up more than 21 points a game an averages just letting up 15. Combined with this the Spartans have forced six turnovers in four games allowing just barely over 200 yards of passing as well.

On the other side of the ball the Spartans have not been the greatest offense in the world, but have done what they needed to win games. Quarterback Nick Starkel has thrown for nearly 1,000 yards and nine touchdowns and only turned the ball over twice. His top target Bailey Gaither has taken most of the workload with 27 receptions on the season and 432 yards where as the next closest receiver has a little over 250.

Truly a Test for the Broncos?

Aside from the buzz saw of an opponent they faced in BYU and giving up 15 unanswered points to Hawaii in the fourth quarter to almost blow the game, Boise State has had barely any fight against other Mountain West opponents. Their average margin of victory in their past four wins has been three touchdowns while scoring at least 42 points in each of those contests. And unlike the Spartans, Boise State’s strength has been its running game Junior Andrew Van Buren only having a little under 300 yards rushing, yet has taken it into the endzone on the ground seven times meaning he is used in a lot of close short yardage situations.

It will be interesting to see how Boise State changes up their strategy against a San José defense that only lets up just 130 yards of rushing a game. I think this defense will force the Broncos to rely on their passing game when getting in close to the redzone which should lead to less points and more of a chance for the Spartans to stay in the game versus and offense that averages 40 points a game.

The Broncos are favored by 11.5 in this one. Personally I see this as disrespectful to the Spartans. They have beaten the same level of talent in each team in the Mountain West, and prove they both belong at the top heading into this game. And in their last game against Hawaii, the Broncos also proved they could give up a huge lead in order to make it close.

However, I truly have faith in this Spartan defense to at least make this a close fight with the Broncos eventually pulling away at the end. With this being said, I have my eye on the points with San José as I don’t believe the Broncos will have a lot of their scores unanswered, or if they do the points will not come in bunches.