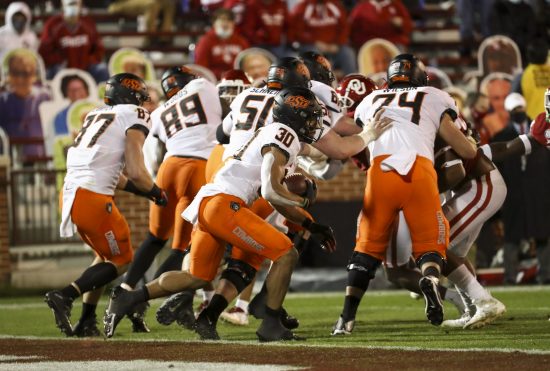 The #23 Oklahoma State Sooners try to bounce back from a loss to rival Oklahoma last week when they host the Texas Tech Red Raiders on Saturday afternoon. It should be another great opportunity for 5-2 OSU to rise back up in the rankings, playing at home as -11 point favorites against 3-5 Texas Tech.

The high powered TTU offenses of the past seem like a distant memory, as the Red Raiders have broken the 30-point threshold just once in the last six games. The offensive unraveling began in a 31-15 loss to Iowa State in week 6 in which the Red Raiders gained just 270 total yards, prompting a switch at QB from Alan Bowman to Henry Colombi.

The maligned Bowman actually ended up being the hero last week against Baylor, coming off the bench to lead the Red Raiders to 12 fourth quarter points in the 24-23 TTU win. Colombi was 10/12 vs. the Bears before leaving with an elbow injury, but now Matt Wells says he is going with the two QB approach vs. Oklahoma State. Will the Red Raiders struggle to get into rhythm trying to give multiple quarterbacks snaps though?

Regardless of what questions the Texas Tech offense might be sifting through, their defense is a legitimate liability vs. Oklahoma State. Despite the win, the Red Raiders gave up 207 yards rushing to Baylor, which was actually an improvement over the 270 yards rushing TCU gained in the 34-18 win the week before. Texas Tech has the 2nd worst total, rush, and passing defense in the Big 12.

Oklahoma State Looking for a Rebound

OSU has really only passed one hard challenge this season, beating Iowa State 24-21 in week 8 as -2.5 favorites. The 27-13 victory over West Virginia was also solid, but Oklahoma State was a -5.5 favorite and both games were in Stillwater. The other three wins for the Cowboys came as at least two TD favorites, and Mike Gundy’s team has also dropped a 34-41 OT meeting vs. Texas and fell 41-13 last week to Oklahoma.

Getting beat by the Sooners last week in Bedlam is a huge disappointment for Oklahoma State, all but putting a nail in the coffin of OSU’s Big 12 Championship game hopes. That being said, there is still a path for the Cowboys, who need to win out against Texas Tech, TCU, and Baylor but also need losses from Oklahoma and Texas.

Either way, Saturday’s meeting with Texas Tech is most definitely a must win for OSU. That’s kind of troubling for Cowboys fans as TTU has won the last two meetings, 45-35 as +9.5 home underdogs last year and 41-17 as +14.5 underdogs in Stillwater in 2018. Another upset win by Texas Tech isn’t out of the realm of possibility either considering Oklahoma State QB Spencer Sanders was removed against Oklahoma with an unlisted injury.

Sanders isn’t the only star battling injuries for Oklahoma State as RB Chuba Hubbard is also banged up, and has only 14 carries the last two weeks. The winner in the last 9 games in this series has scored at least 41 points, but neither team looks like they can reach that total this year.