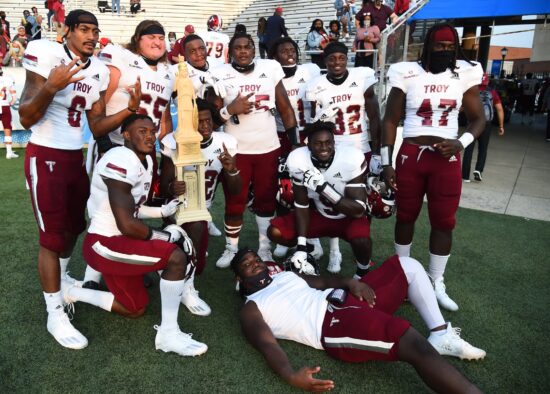 #13 Coastal Carolina Chanticleers (10-0) take a trip to Troy, Alabama on Saturday to face the Troy Trojans (5-5). The Chanticleers are the top scoring offense in the Sun Belt Conference (37 PPG) while the Trojans sit near the bottom of the pack (26 PPG).

The Chanticleers head into Saturday’s game as the top ranked non-Power 5 school in the College Football Playoff standings thanks to a win against BYU last weekend.

The BYU Cougars had been the leader of non-Power 5 schools since the beginning of the season, however the stars aligned for these two teams to meet although the game was not on either team’s original schedule.

QB Grant McCall continued his efficient play (no INTs, 68 yards rushing) failing to turn the ball over allowing Coastal Carolina to control the clock. The Chanticleers kept BYU Heisman candidate QB Zach Wilson off the field, with more than 15 minutes of game time difference in time of possession (38 minutes CCU to 22 minutes BYU). With a clutch defensive stop at the end of the game preventing a Cougar comeback, Coastal Carolina held on to win 22- 17.

McCall and the Chanticleers have a great opportunity to finish the season with two dominating performances and put themselves straight into a New Year’s Six Bowl.

Seniors Tray Eafford, Kaylon Geiger, Reggie Todd, and Khalil McClain, will all be sorely missed by Troy fans when the season ends. Currently at an even record 5-5, the Trojans can make a great case for Bowl season if they finish the year strongly.

As mentioned above, QB Gunnar Watson played through a rib injury last week at South Alabama. Although you would not have been able to tell as Watson arguably played his best game of the season (82% completion rate on 41 attempts, 297 yards 3 TDs). Not surprisingly, the Senior squad of WRs also had their best game of the season as a group (20 catches, 190 yards 3 TDs).

If the Trojans want any shot at an upset victory Saturday, Watson and these WRs will need to play their best game of the season against the best defense they will have seen all year.

The Trojans have one of the best WR arsenals in the Sun Belt Conference and maybe in the country simply due to experience. However, the Troy run game is equally as worse, which exposes Troy as a very one-dimensional team.

It’s hard to take the Trojans after watching the way Coastal Carolina dominated BYU in time of possession. People quickly forgot the Chanticleers were 10.5-point underdogs last weekend against BYU because the largest lead all game was after Coastal’s first score to make it 6-0 (missed the PAT). We expect the Chanticleer’s defense to stop the Troy running attack without much effort allowing pass rushers to pin their ears back and put constant pressure on Watson.

Coastal Carolina must dominate Troy to present their case to the CFP committee, so we’ll expect the Chanticleers to not overlook the Trojans with the conference championship game looming next week, and cover by two touchdowns.