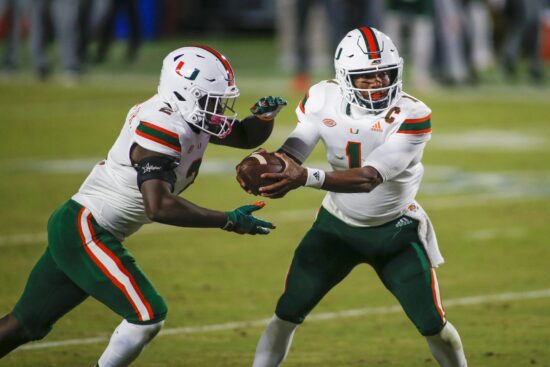 The #9 Miami Hurricanes put their 5-game win streak on the line when they host the potent offense of the #20 North Carolina Tar Heels on Saturday.

Miami missed out on a berth in the ACC Championship game due to their loss to Clemson in week 6, but that’s the only blemish on the ‘Canes resume this year. UNC has scored 49+ points in three of their last four.

Another Big Outing for UNC Offense?

North Carolina comes into Saturday’s regular season finale off a 49-9 win over Western Carolina, albeit as a 50-point favorite. The Tar Heels’ failed their biggest test of the season in a 31-17 home loss to Notre Dame in 13, but also had slip ups against Florida State (31-28) as -13.5 favorites and Virginia (44-41) as -7.5 favorites.

The Tar Heels look like one of those teams that could win each and every week – or lose out of the blue as well. Mack Brown’s team is just 2-2 on the road, but does have the best offense in the ACC putting up 534.5 yards per game. UNC is 5th in the country in yards/game, a big reason why Saturday’s betting total is 67.5.

Sam Howell and the UNC passing game get a lot of the national credit, which is well deserved as the QB has thrown for 3,129 yards this season with 26 TD to just 6 INT. Howell has a QB rating above 210 in 3 of the last 5 games, but what makes the Tar Heels so dangerous is that they are a great running team as well. Both Michael Carter and Javonte Williams have amassed 900 yards on the ground this season, with a combined 23 TDs.

The Hurricanes have rattled off five straight wins since the 42-17 loss at Clemson in week 6, their only defeat of the season. Three of those wins over the last month-plus have been by 5 points or less, but Miami looked like they put everything together last week in a 48-0 shutout vs. Duke.

Miami can hang with North Carolina in a shootout, as D’Eriq King has 10 TD to 0 INT the last four games. King went toe-to-toe against NC State in a 44-41 win in week 10, going 31/41 for 430 yards and 5 TD. Where Miami lacks a bit in this game is that they don’t have the run game that counters North Carolina’s. Leading rusher Cam’ron Harris (555 yards), hasn’t eclipsed the century mark the last 7 games.

Of course the Hurricanes have a better chance on Saturday if they don’t get into a ping-pong match with UNC. Miami is 4th in total yards allowed and against the pass in the ACC, and they’ve allowed 20 points or less in 3 of the last 5.

The Hurricanes are -3 point favorites on Saturday, and are 4-0 at home – where they are playing for the first time since October 24th. UNC won this meeting 28-25 on their home field last season, and has the offense to repeat that feat this year.