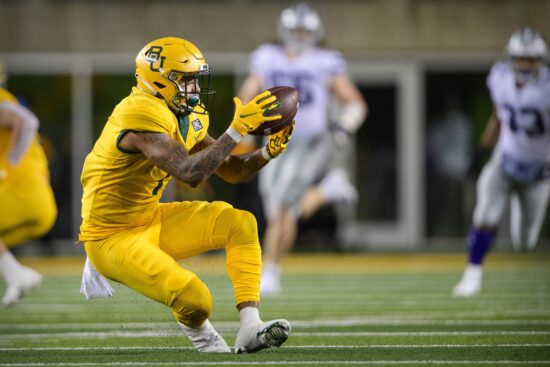 A dismal loss on the road to the TCU Horned Frogs last week officially knocked the Cowboys out of the Big 12 title conversation and now will have to settle for a bowl game presumably if they chose to play in one this year.

Disappointing losses has been the epitome of what this crazy season has been for Oklahoma State as they were once the #6 team in the country and were looking for more than just the Big 12 title; potentially the College Football playoff.

However, they will nevertheless look to send the seniors out with a win however against lowly Baylor this Saturday.

OK State Offense: Hubbard is Back

Sensational Running back Chuba Hubbard came into the season with the 2019 FBS rushing title. However, injuries to himself and opt outs among the offensive line essentially doomed his chances to repeat but Hubbard is back for what is presumably his last game in an Oklahoma State uniform, so expect him to make an impact this game.  Also, despite not playing in every single game this season, the junior still has over 600 rushing yards and five touchdowns and just adds a threat you have to watch out for on every play if you are Baylor.

This comes as a tremendous boost, considering Sophomore Quarterback Spencer Sanders has been average at best this year. Through nine games he has only thrown for seven touchdowns, just one more than interceptions thrown. This also might be due to the lack of available talent on the receiving core for Oklahoma State as well. Leading receiver Tylan Wallace has six of those seven touchdown passes, meaning other players are having a hard time either getting open or finding the endzone; probably a combination of both.

Any Hope for a Baylor Upset?

If it weren’t for their surprising home victory against Kansas State two weeks ago, Baylor’s only win would have come against Kansas, who is winless season. Despite this however, the Bears have shown some fight in their last five games with their largest margin of defeat coming by just 13 points. The trouble with the Bears is, most of these losses have come because they are one-dimensional when it comes to offense. They average less than 100 yards on the ground a game, forcing to rely on Senior Quarterback Charlie Brewer to win them their games.

Brewer hasn’t been bad, he’s on pace to throw for over 2,000 yards and has 14 touchdowns through the air. But his eight interceptions are way too high in my opinion; especially since half of them have come against AP Top 25 opponents, aka Oklahoma State.

I expect Hubbard’s return to make the difference maker in this one. The Baylor defense is letting up nearly 200 yards rushing on the ground a game which should let Hubbard run for as much as he wants to and take the stress off the poor Cowboy passing game.

On the flip side, the Baylor run game is non-existent at this point and even though the Cowboys have been bad against the run like the Bears, I think this will change for once this game.