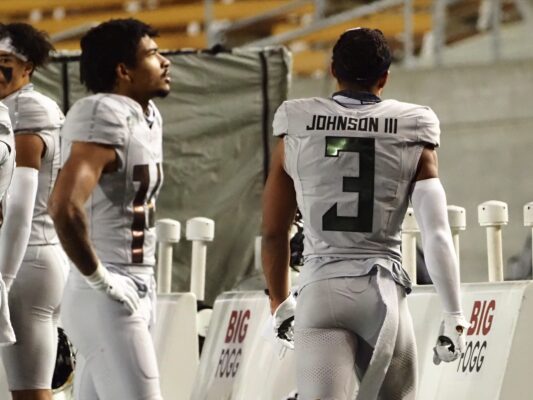 Both Oregon and Washington were thought to be the cream of the crop of the Pac-12 when the conference finally decided to resume its season.

However Oregon’s back to back losses to Oregon State and Cal and Washington’s dumfounding defeat to a struggling Stanford team have knocked both these squads out of the College Football Playoff.

However somehow despite these losses, both of these teams still find themselves first and second place in the Pac-12 north division, meaning a win for either Saturday means they are headed to the conference championship.

When comparing these foes out west it’s hard to see who has the edge. Oregon favors the pass more heavily than the Huskies with Quarterback Tyler Shough throwing for 11 touchdowns to Washington Quarterback Dylan Morris’ four. However Oregon is only averaging 50 more passing yards than Washington and only 13 more rushing yards.

This means that despite the similarities in the offensive stats, the Huskies appear to have a harder time actually finding the endzone through the air and have been forced to use other options to score versus the Ducks who are ride or die with the passing game.

But Who Really Is Oregon This Year?

Oregon have dropped two in a row and when they haven’t been pulling away from game in the second half to secure a win, they have been letting their opponent stay in the fight which has let them come back to win games, aka these last two defeats. The only time this year when the Ducks have actually looked dominant is when they played Stanford in their first game of the season.

If it weren’t for the last game against Stanford, I would have no problem picking Washington over Oregon but then again the last game happened. The Huskies gave up 24 points in the first half due to being gashed by the Stanford running game and could only muster up three points themselves in the half. This ultimately made their furious comeback fall short in the second half losing 31-26. There really is no explanation for why they got beat this bad in the first half; both their top two receivers were out for this game so there is that, but the defense just had no answer for this rushing attack in the first half.

Despite their loss in the last game, I am still going with the Huskies in this one, taking the +6 spread and sprinkling the +175 current moneyline. Washington just has looked like the most consistent team out of the two and it is clear they made adjustments in the second half to almost win the game, whereas the second half is where Oregon has lost games.

Oregon also is not that heavy of a running team which I think will benefit the Huskies after being exposed on the inside from the Stanford running game. I’m taking the points with Washington but will not go heavy on the money line considering it will be tough for the Ducks to lose three in a row, especially playing at home.