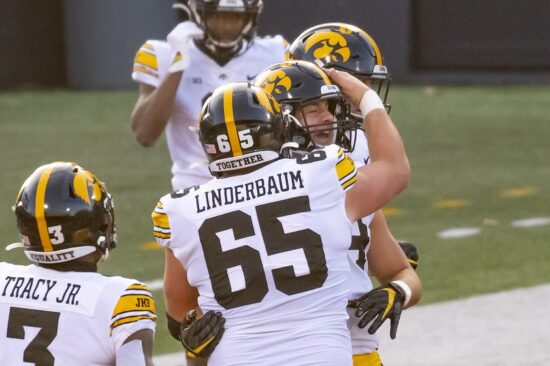 It’s a battle of top 25 teams when the #25 Wisconsin Badgers visit Iowa City to take on the #19 Iowa Hawkeyes.

Both teams are looking up at Northwestern in the Big Ten West standings, and each have lost to the Wildcats putting them that much farther back in the tie breaker scenario.

This game has little impact on conference slotting, but it’s a great rivalry tilt nonetheless.

The Badgers have played just two games this year due to COVID cancellations, so nobody can blame them for having a hard time getting into rhythm. Saturday’s meeting with Iowa marks just the second time this season that UW has been able to play in consecutive weeks, but they lost 17-7 to Northwestern in that meeting on November 21st.

The biggest thing Wisconsin coach Paul Chryst has to found out is what happened to his offense. UW looked like one of the most potent attacks in the country in a season opening 45-7 win over Illinois followed by a 49-11 victory at Michigan. Since then Wisconsin has scored just 13 points total in the Northwestern loss and in falling 14-6 to Indiana last week.

Things wouldn’t appear to get much better for the Badgers at Kinnick Stadium and against Iowa’s #3 ranked defense in the Big Ten. What’s overlooked about Wisconsin’s offensive struggles the last two weeks though is that their defense has also only allowed 49 total points in four games this season. The Badgers have the top defense in the Big Ten, and the Hawks’ have certainly had their share of offensive woes this year as well.

Iowa On a Nice Stretch

The Hawkeyes limped out of the gates this year with a season opening 24-20 loss at Purdue and that devastating 21-20 defeat at home to Northwestern. Since then though, Iowa has turned things around with wins in five straight games.

Iowa has shown the propensity to step on the gas against teams this year, dominating Michigan State 49-7, Minnesota 35-7, and Penn State 41-21. The Hawkeyes fell down 14-0 in the 2nd quarter against Illinois last week, but were able to get 3TD passes from the oft-maligned Spencer Petras to blaze back for a 35-21 win on the road. Petras had four TD passes total in the six games prior to last week.

Saturday’s tilt with Wisconsin is likely to be another close affair and the Badgers are actually -1 point favorites on the road. A matchup featuring two of the top three defenses in the Big Ten should also be low scoring, and the betting total is just 41.5.

The Badgers have won 7 of the last 8 in this series, and the line moving away from Iowa at home (-2.5 open) gives a good indicator that this could go to victories in 8 of the last 9.