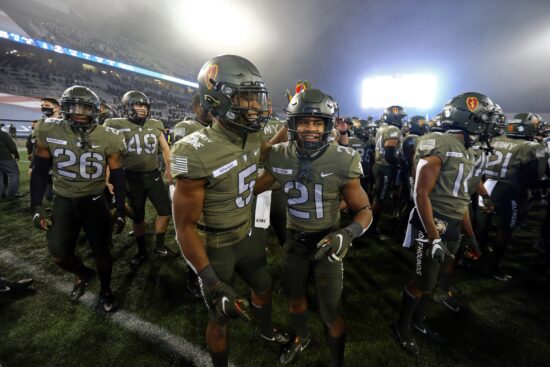 After coming off the annual historic Army Navy game with a 15-0 shutout victory over Navy, Army faces its other counterpart in the nation’s military as they host the Air Force Falcons.

Expect this one to be a grind it out affair as you should know by now, both schools do not air the ball out whatsoever.

Through this pandemic, the Black Knights have still managed to play 10 games on their schedule and have won most of them sitting at 8-2. Now course with their style of play on the ground you would expect that they would be used to scoring sparingly right? Well you would be wrong! The knights have put up an average of almost 30 a game and even scored 28 points to beat Georgia Southern and UTSA by still being one dimensional on the ground.

However the other side to those victories was the solid defense. Army lets up an average of just 14 points per game, letting opponents score over 30 points just once in 10 games. This is due to them having a balanced front that may let up a little over 100 yards rushing, but also less than 160 yards passing! This team is well balanced and disciplined to make any game close.

Despite only playing five games so far this season, as this Army game was actually scheduled back in the beginning of November, Air Force has played surprisingly well. Quarterback Haaziq Daniels has actually thrown for over 300 yards and two touchdowns in an offense that seems to run the ball more than Army does.

They average nearly 350 yards on the ground and only give up slightly over 100. This time of possession focused offense has kept opposing teams offense off the field, and when they actually can get on the field, they don’t put up points. The Air Force D is only giving up 16 a game with opponents scoring over 17 just once in their last five games.

With both teams having the same style of play on both sides of the ball it’s hard to see who has the advantage. But Vegas is favoring the Falcons and I will too. They seem to execute better in the run game than Army does even when they need to throw it, they have shown moderate success and don’t turn the ball over whereas Army has 3 interceptions.

Furthermore I think despite them playing less games, the Falcons have faced better competition in undefeated San Jose State and Boise State; they lost to both but they showed they can compete with them. I am also going to take the under in this game as well. Both offenses slow things down with the run game but also shut others down with their defense. The first team to stretch their lead to a two possession game will likely win this one.